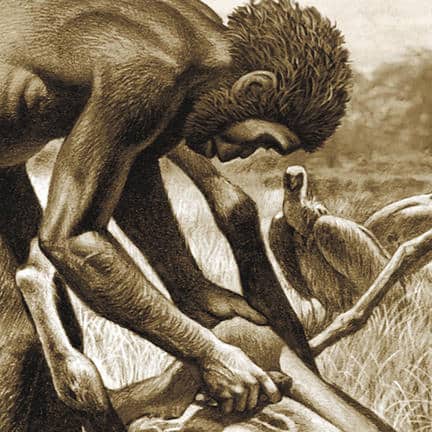 Ever found yourself gesturing to bemused locals as you try asking for directions in a foreign city? It’s an inkling of the sort of challenges our ancient ancestors faced before language evolved. But what was it that actually drove the development of language?

Some researchers suspected it was the need to pass on the complexities of stone tool making. Now, one group has done the experiment. As they report in Nature Communications, without language it is far harder to pick up the finer points of tool-making techniques.

The researchers suggest their finding may be the answer to a long-standing puzzle in the archaeological record. Quite out of character with the hallmark of humans as innovators, our ancestors seem to have been stuck in a rut. Around 2.5 million years ago, Homo habilis struck flint to make edges sharp enough to butcher animals or chop up plants but not much more. These irregular-shaped choppers, which to the untrained eye could just pass for broken rocks, are known as Oldowan tools – named after the Olduvai Gorge in Tanzania where they were first discovered.

For the next 700,000 years, stone tool making barely advanced. Finally, about 1.7 million years ago Homo erectus came up with an innovation. Their regularly-shaped Acheulean tools (named after the Saint-Acheul region in northern France where they were first found), had been clearly worked on two faces to create a hand axe good enough to chop through wood. “It’s that meticulous fashioning and consistency of shape that evokes a strong cultural sense,” says Monash University archeologist Bruno David.

But why were Homo habilis stuck in a rut for 700,000 years and what got them out of it? Archeologist Natalie Uomini at the University of Liverpool and biologist Kevin Laland at the University of St Andrews suspect it was the emergence of language that drove this first technological revolution. So in an experiment involving tonnes of rock, they tested how difficult it is to learn to make stone tools if your teacher can’t talk.

Study participants were divided into four groups. The first only had the chance to examine the Oldowan tools. The second observed an expert making them. In the third, the expert added gestures while demonstrating. And in the fourth, the expert also used verbal instructions. The four groups were then given a flint core and a hammerstone and had 20 minutes to make as many good stone cutters as they could.

Each student group then became tutors to the next group of participants, using the same rules of communication. In total, 184 participants took part, producing more than 6,000 flint shards of distinctly variable quality.

Not surprisingly, the participants allowed to use language were more successful at passing on the skills necessary for producing high quality flakes. The surprise, says Laland, was that those participants who were only allowed to watch and imitate their teacher did no better than those who were simply shown the finished flakes.

“The biggest surprise for me was that, in essence, imitation didn’t help,” says Laland.

With hindsight you can see why, he adds. “It’s a lot more complex than it might appear. You have to hit it exactly at the right place, at the right angle, with the right pressure.” Those details are hard to pick up only by watching somebody rapidly crack two stones together.

For Laland, these observations suggest that stone tool innovation depended on the evolution of language.

He guesses early hominins probably used a simple protolanguage, but “at least by the advent of the Acheulean we would expect the beginnings of the emergence of  language”. Fossilized remains are mute on the subject since vocal cords leave no trace, and estimates for when language emerged have ranged wildly from two million years ago to 50,000 years ago. “To suggest language appears [at the very early end] is quite radical,” Laland admits.

But not everybody is convinced by the argument.

“All this study tells us is that teaching, especially using language, improves the way individuals learn,” says Darren Curnoe who researches human evolution at the University of New South Wales.

“Let’s be quite frank – we have no idea why human language evolved,” he says. “It may just have been an emergent property of a complex brain.”