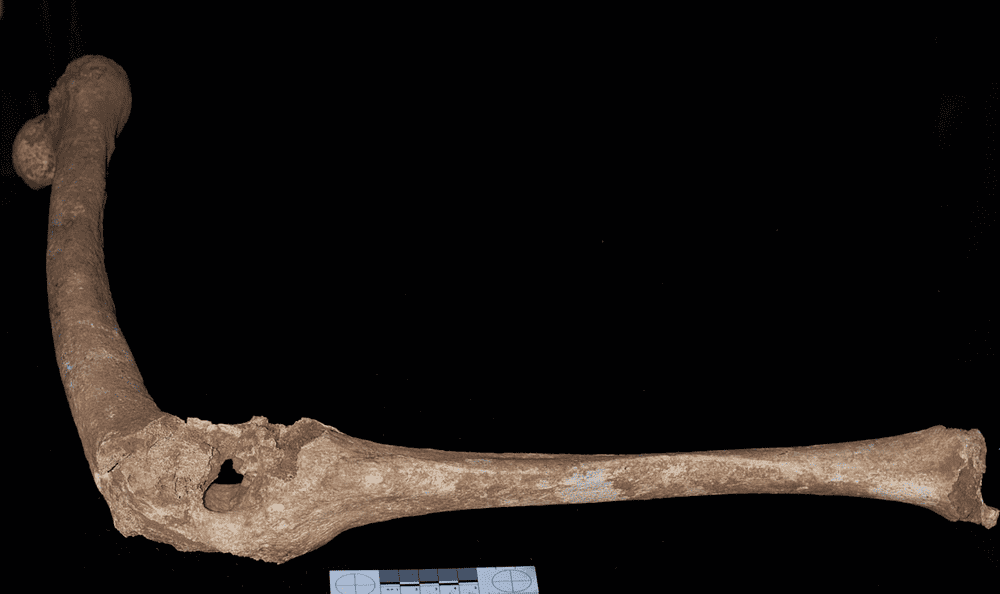 The left leg of an adult male skeleton found in Vergina. The femur and the tibia are fused, and hole at the knee suggests a devastating penetrating injury, matching historical accounts of a leg wound suffered in battle by Philip II, the father of Alexander the Great. Credit: Javier Trueba

Anthropologists are hopeful they have discovered the remains of Alexander the Great’s father.

A new analysis of bones from a Macedonian tomb reveals a skeleton with a knee injury that matches some historical records of one sustained by Philip II.

But, as Live Science reports, not everyone is convinced and the findings have sparked a fresh debate over the identity of the skeleton.

“The knee is the clincher,” said Maria Liston, an anthropologist at the University of Waterloo, who was not involved in the new study, which is detailed today in the journal Proceedings of the National Academy of Sciences (PNAS).

But Theodore Antikas, a researcher at Aristotle University in Greece, rejects the discovery. “This publication in PNAS is incorrect,” he said.

Philip II was murdered in 336 BCE by one of his bodyguards, perhaps in an act of revenge.

Archaeologists uncovered the Macedonian tomb complex near Vergina in the 1970s but are uncertain to whom the three tombs on the site belong to, although one is widely accepted to belong to Alexander IV, Alexander the Great’s son.

The skeleton currently suspected to be that of Philip II is of a man in his 40s, about 180 centimetres tall. It is accompanied by the skeleton of a woman aged about 18 and a newborn baby.

The ages match historical records of Philip II, Cleopatra and their infant.

Originally published by Cosmos as Skeleton of Alexander the Great’s father?