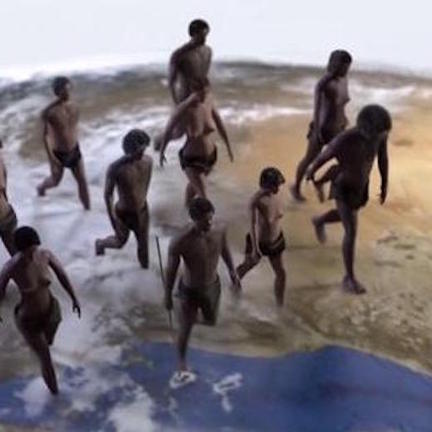 More than 100,000 years ago, modern humans ventured out of Africa and proceeded to bump uglies with Neanderthals as they went. Credit: IVAN HEREDIA / CSIC

Modern humans’ love affair with Neanderthals stretches back far longer than we thought, with a genetic analysis showing they interbred around 100,000 years ago.

The analysis was published in Nature.

“We now find evidence for a modern human contribution to the Neanderthal genome,” says Sergi Castellano, senior author of the paper. “This is likely the result of much earlier interbreeding.”

They also probed the DNA of another early and now extinct human – a Denisovan – also from the Altai mountains. Denisovans and Neanderthals shared a common ancestor 381,000 to 473,000 years ago.

But when they studied the Altai Neanderthal genome, they saw it contained telltale H. sapien genes.

The only way modern human DNA could’ve found its way into the Neanderthal was, well, sex between the species, 100,000 years ago.

The Denisovan, on the other hand, didn’t contain any H. sapiens genetic material, nor did the Croatian or Spanish Neanderthals.

This “gene flow” fits with recent evidence that modern humans made their way to southern China as early as 120,000 years ago.

These early movers may have had more opportunity to get it on with other hominins than their relatives, who waited 50,000 years before spreading from Africa, the researchers write.

Originally published by Cosmos as Humans and Neanderthals