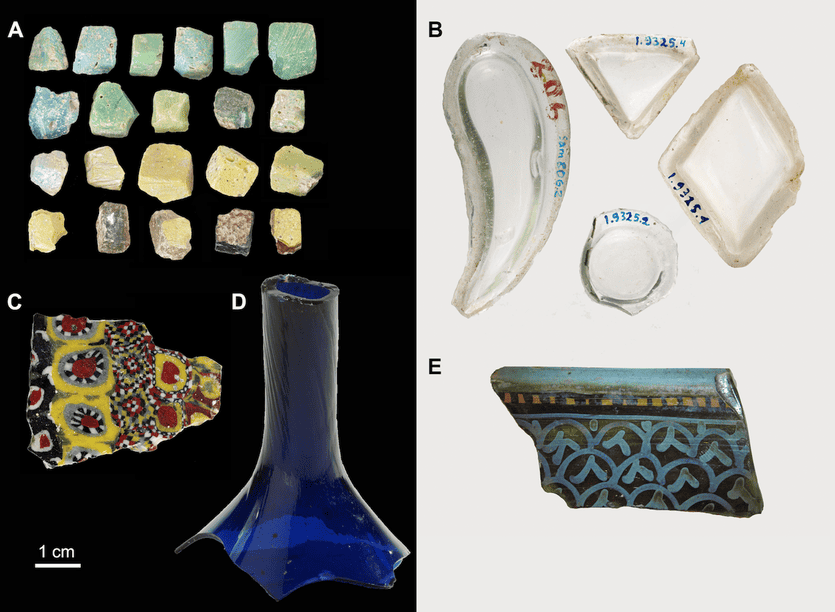 Glassware from the ancient Muslim city of Samarra. Credit: Images A, C and D from the Victoria and Albert Museum, London; images B and E from the Museum für islamische Kunst / Staatliche Museen zu Berlin

The city of Samarra, located in present-day Iraq, was a hub of glass-making and trade around 1200 years ago, according to archaeological artefacts examined by a team from the French National Centre for Scientific Research.

The findings, published in the journal PLOS ONE, resolve a long-standing question concerning the ancient city, which acted as the capital of the Muslim Abbasid Caliphate between 836 to 892 CE – an empire that at its peak stretched some 11 million square kilometres across northern Africa, through the Arabian Peninsula and Persia, and north into the Caucasus.

Multiple archaeological excavations over many years recovered an extraordinary range of glassware from the site, but their original places of manufacture remained unknown.

The new study reveals that many of the colourful and delicate artefacts were made in Samarra itself.

Examining 265 previously discovered artefacts held by museums in England and Germany, the researchers, led by Nadine Schibille, found that although some of the glass had been imported from around the empire, especially the Levant and Egypt, most of the pieces were so similar in chemical composition that they were most likely produced in Samarra itself.

The items, which included bowls, lamps, bottles, glasses, and decorative ware, were examined using mass spectrometry, to identify trace elements which offered clues to the geographical origin of the source materials. From this, the researchers could determine the region from where each item came, as well as the quality of the finished pieces.

Perhaps unsurprisingly, they found the highest quality material had been produced for use in the city’s main caliphal palace.

Samarra’s role in the Abbasid Caliphate was short, being significant for only 56 years of the empire’s political reign, which lasted from 750 to 1258 CE. The city was quickly abandoned when the caliphs returned to Baghdad, 125 kilometres to the south.