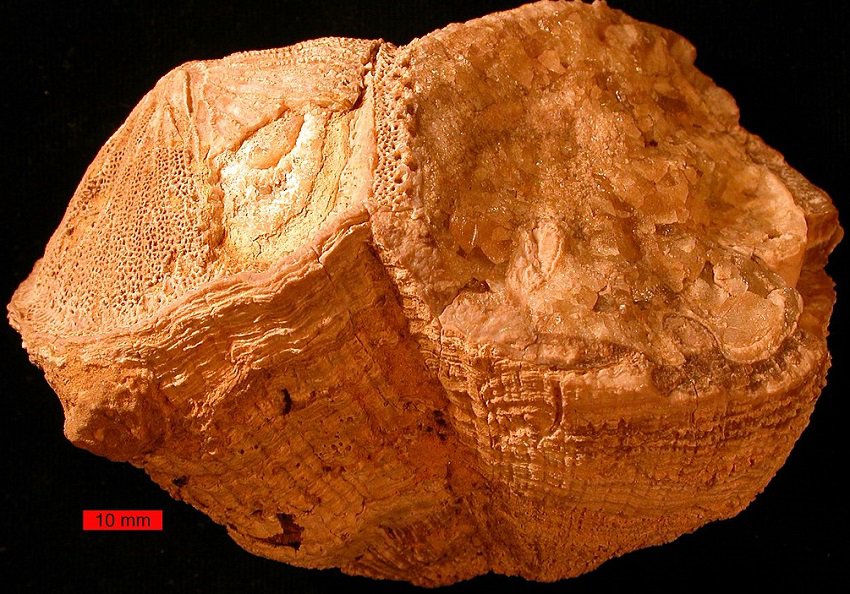 Scientists studying growth bands in a fossil mollusc that lived shortly before the dinosaurs went extinct have determined that in the past 70 million years, the Earth’s rotation has slowed by nearly half an hour.

It’s a finding that not only helps shed light on ancient climate conditions but on the astronomical evolution of the Moon, whose tides have been slowly putting the brakes on the Earth’s spin.

The mollusc was from an extinct group known as rudist clams, which were known to build their shells one layer at a time—“a bit comparable to tree rings,” says Niels de Winter, a paleoclimatologist at Vrije Universiteit Brussel, Brussels, Belgium, lead author of a paper in the journal Paleoceanography and Paleoclimatology.

With the use of a laser, de Winter says, his team was able to shoot tiny holes in the fossil, examining its composition at the micron scale – something not possible for human researchers with microscopes.

This allowed them to peel back the shell’s layers in tiny increments corresponding to about one quarter of a day’s growth, extending that growth log over nine years of the clam’s life.

“This allows us to measure how the composition of the shell changed over short time periods and learn about very rapid changes in the shell’s environment,” de Winter says. From that, he says, “[we could] count the number of days in a year, because we can also see seasonal cycles.”

They found that 70 million years ago, there were 372 days in a year instead of the 365¼ we have today—a 23 minute-per-day difference.

The result, he says, supports astronomers’ understanding of how the Earth-Moon system is evolving, with the Earth’s day slowly lengthening as the Moon gradually moves away from us as a byproduct of the same interaction.

Currently, de Winter says, NASA has measured the rate at which the Moon is receding at 3.8 centimeters a year.

But that can’t always have been the case.

“The evolution of the Earth-Moon distance must have been more complex,” he says, “but we don’t know exactly how. This type of measurement helps astronomers create better models about how the Earth-Moon system behaved from the moment of the Moon’s formation.”

“What I personally think is even more exciting is that we can study changes in the environment at this very high scale,” de Winter says.
In other words, he says, it’s now possible not just to look at ancient climates, but day-to-day weather changes. “Think of large storms or very hot days,” he says.

At the moment, that’s only been done for the one clam. “It is hard to find fossils as well preserved as the specimen we used, and [the work] takes a lot of time and effort,” he says.

But that doesn’t mean that similar studies won’t soon follow.

And the idea that we can reconstruct that level of weather detail that far back in time, he says, has “big implications” for the study of ancient climates, especially warm eras such as the one in which his clam lived.

“We climate scientists are very interested in such reconstructions, as they may teach us how patterns in extreme weather and climate will evolve in the near future.”

Originally published by Cosmos as 70 million years ago, days were shorter