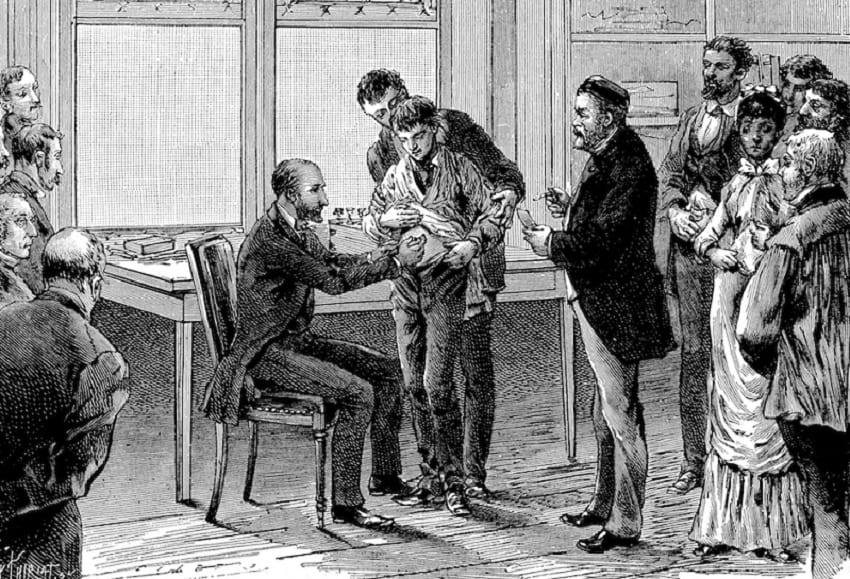 Roll up your sleeves everybody, it’s vaccination time. Don’t like needles? Who does? It’s estimated that at least 10% of US adults are trypanophobic – they have an “excessive or irrational fear of injections or needles”.

Despite this, millions of people around the world receive periodic vaccine injections for a range of diseases.

The World Health Organisation certainly recommends annual vaccination as “the most effective way to prevent influenza”, and last March launched its Global Influenza Strategy for 2019-2030.

It calls influenza “one of the world’s greatest public health challenges”, with an estimated one billion cases, of which three to five million are severe, “resulting in 290,000 to 650,000 influenza-related respiratory deaths”.

In a frighteningly prescient portion of its launch statement, WHO director-general Tedros Adhanom Ghebreyesus says: “The threat of pandemic influenza is ever-present. The ongoing risk of a new influenza virus transmitting from animals to humans and potentially causing a pandemic is real. The question is not if we will have another pandemic, but when.”

In the US, the Centers for Disease Control and Prevention says vaccine manufacturers expected to supply up to 169 million doses of influenza vaccine for the 2019-20 season.

Vaccines, it says, “use dead or severely weakened viruses to trick our bodies into thinking we have already had the disease. When you get a vaccine, your immune system responds to these weakened ‘invaders’ and creates antibodies to protect you against future infection. It has special ‘memory’ cells that remember and recognise specific germs or viruses.

“When you come across that virus in the future, your immune system rapidly produces antibodies to destroy it. In some cases, you may still get a less serious form of the illness, but you are protected from the most dangerous effects.”

It’s a pretty good trick, and one of the pioneers was Ireland’s Francis Rynd, a surgeon at Meath Hospital in Dublin, who is credited with delivering the first subcutaneous or hypodermic injection in 1844.

This idea of immunisation, however, precedes Rynd’s invention of the hollow needle injection by hundreds of years.

Some of the credit for our knowing about immunisation today goes to an 18th century English aristocrat, Lady Mary Wortley Montagu, wife of the British ambassador to the Ottoman empire.

Lady Mary actively campaigned in Britain in favour of treatments against the scourge of smallpox, a disease responsible for the deaths of many millions of people across the globe, but which in 1980 was declared eradicated by the World Health Assembly.

While in Constantinople in 1717, she observed the practice of variolation, in which healthy individuals were exposed to the variola, or smallpox, virus. They then experienced a mild form of the disease, but upon recovery were observed to be immune to it. And although 1% to 2% of those inoculated died, this was compared to a mortality rate up to 30% of those who contracted the disease naturally.

The terms inoculation and variolation were often used interchangeably, says Stefan Riedel, from the Baylor University Medical Centre, in Dallas, US.

In a 2005 article headlined “Edward Jenner and the history of smallpox and vaccination”, published in the university’s journal Proceedings, Riedel says the word “inoculation” is derived from the Latin inoculare, meaning “to graft”.

“Inoculation referred to the subcutaneous instillation of smallpox virus into non-immune individuals. The inoculator usually used a lancet wet with fresh matter taken from a ripe pustule of some person who suffered from smallpox. The material was then subcutaneously introduced on the arms or legs of the non-immune person.”

“Variolation was likely practiced in Africa, India, and China long before the 18th century, when it was introduced to Europe,” he says.

As the title of Riedel’s article suggests, one of the key players in developing the practice of vaccination is Edward Jenner, who has been called “one of the most famous scientists in medical history” and the “father of immunology”.

Jenner was born on 17 May 1749, in Berkeley, Gloucestershire. At age eight he was inoculated against smallpox and at 13, according to Riedel, he was apprenticed to a surgeon and apothecary in rural south-west England, where one day he “heard a dairymaid say, ‘I shall never have smallpox for I have had cowpox’.”

Cowpox makes itself known through sores forming mainly on the udder and teats of cows. It is caused by the vaccinia virus, is transmissible to humans, and is closely related to variola.

Jenner went on to build a career as a well-regarded doctor and scientist, and in 1796 he began his groundbreaking experiments into a cure for smallpox.

A BBC History report explains he was “testing his theory, drawn from the folklore of the countryside, that milkmaids who suffered the mild disease of cowpox never contracted smallpox”.

He found young dairymaid Sarah Nelms, who had fresh cowpox lesions on her hands and arms. On 14 May 1796, using matter from Nelms’ lesions, he inoculated eight-year-old James Phipps. The boy developed a mild fever and rash but soon recovered. In July Jenner inoculated Phipps again, with matter from a fresh smallpox lesion. No disease developed, and Jenner concluded that protection was complete.

Jenner submitted a paper to the Royal Society, which rejected his findings. He then privately published a small booklet in which he described his new procedure, which he called vaccination, from the Latin word for cow – vacca – and cowpox, vaccinia.

“Jenner was widely ridiculed. Critics, especially the clergy, claimed it was repulsive and ungodly to inoculate someone with material from a diseased animal.”

Riedel says vaccination eventually became popular “through the activities of others, particularly the surgeon Henry Cline, to whom Jenner had given some of the inoculant”.

“Despite errors, many controversies, and chicanery, the use of vaccination spread rapidly in England, and by the year 1800, it had also reached most European countries.”

An article published in 1998 in the International Journal of Infectious Diseases provides a worthy footnote to the story of vaccination and the discoveries of Edward Jenner.

In “The myth of the medical breakthrough: smallpox, vaccination, and Jenner reconsidered”, authors Cary Gross and Kent A Sepkowitz say the discovery of penicillin and the eradication of polio and smallpox have become great stories built around a singular hero.

“The success of vaccination and subsequent eradication of this disease elevated Jenner to a status in medical history that is rivaled by few,” they write.

But the eradication of smallpox does not start or end with the work of Jenner. “Men such as Benjamin Jesty and Reverend Cotton Mather, as well as unnamed physicians from 10th century China to 18th century Turkey, also made critical contributions to the crowning achievement”.

“Although Jenner’s contribution was significant, it was only one of many. It is extremely rare that a single individual or experiment generates a quantum leap in understanding; this ‘lone genius’ paradigm is potentially injurious to the research process.”

Originally published by Cosmos as History of ideas: vaccines and immunisation