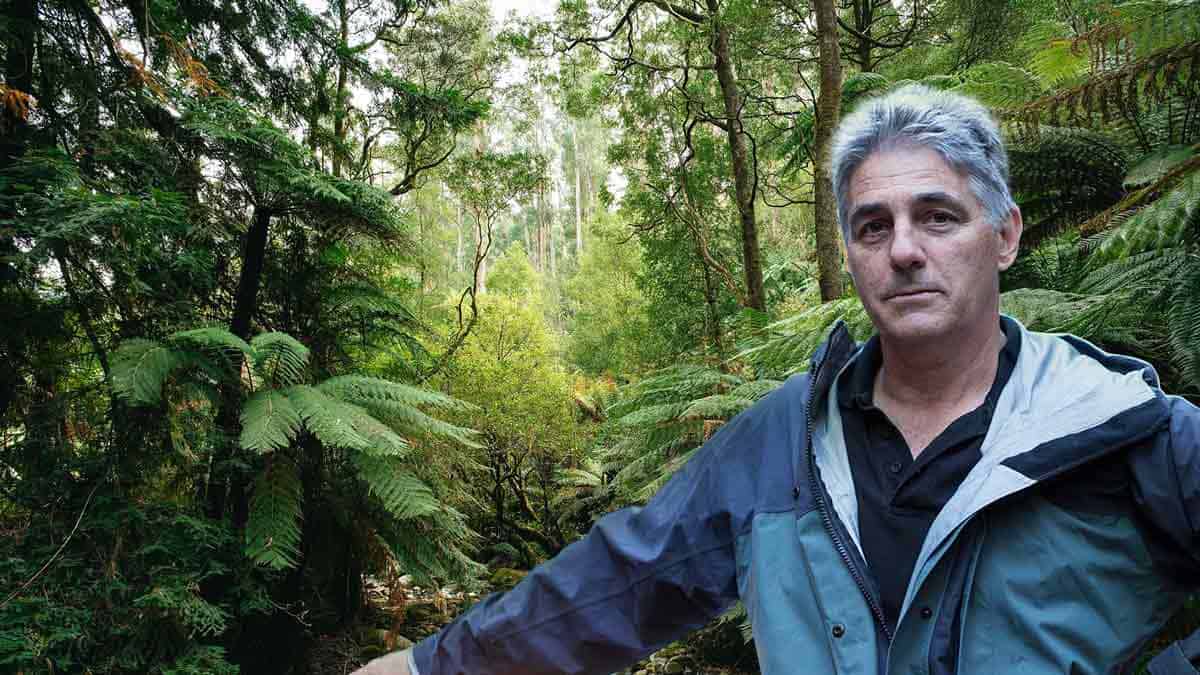 David Lindenmayer is a professor at the Australian National University and an expert in forestry and resource management. Background image credit: Ippei Naoi / Getty Images.

The evidence is in: logging our native forests increases fire risk, threatens water supply, destroys habitat, squanders a carbon resource, and doesn’t even supply timber. The next big thing? A politician guided by the science and good economics.

I actually started in marine science back in the early 1980s, studying at James Cook University in Townsville and working as a volunteer for Charlie Veron, one of the world’s great coral taxonomists – I spend a lot of time underwater with Charlie. It’s interesting that he started off studying in forests and went on to become a marine biologist, while I started in marine biology and ended up working in forests. Charlie did his Honours program on a remarkable animal called the greater glider – for all intents and purposes, it’s a small gliding koala. It’s an animal that we write about regularly in our scientific research.

I decided to change my degree after two years, switching to zoology and forestry. This was fortuitous: I was offered a job as a technical assistant in 1983 and I’ve worked continuously in forestry since then. I trained in forestry, and my PhD was in forestry. I was someone who believed in the notion of ecologically sustainable forest management, and wrote textbooks on that subject: how you calculate sustainable yields, all those kinds of things.

What really changed for me came after the 2009 fires in Victoria – it became very clear that the government agencies involved actually had no intention of changing the way that they managed the forests, even though a very large amount of the forest resource had been destroyed, or very badly damaged, by those fires. Everything that I’d been writing about sustainable forest management and working alongside government agencies around the issue was not what it was all about. What it was all about for them was simply extracting as much resource as possible.

It is possible to manage things if you do it in the right way. It is possible to walk and chew gum if you use good science, and you’re quite conservative in the way you use natural resources like forests. For example, when you’re estimating how much timber you’re going to take out of a forest, you need to account for the fact that some of the forest has been damaged by fire. You need to account for the losses of that timber and then adjust your estimates of what you can take accordingly. And that’s exactly what VicForests didn’t do; the Forestry Corporation of NSW is the same.

The other thing that became important was a horrific discovery that we made in 2014. When we looked at what happened during the 2009 fires, we discovered that the areas that had a history of logging actually burnt at a much higher severity than intact forests – up to seven times the probability of high-severity fire. We’ve since discovered that’s exactly what occurred again during the Black Summer fires of 2019–20. These extensive areas of previously harvested forest are actually carrying an extra fire burden in them that we hadn’t accounted for before.

Consequently, my thinking has moved from this notion of truly ecologically sustainable forest management to thinking about where you get the highest value for your different natural assets. It’s become quite clear that Australia’s native forests are much better maintained as long-term carbon stores. And in terms of tackling climate change, it’s much better for us to source our timber from plantations.

People will say, “But we need timber products – where are we going to get them from?”. And the answer is we’ve already got them. Victoria grows 3.9 million tonnes of eucalypt pulp logs to make paper and woodchips every year. But then we go ahead and export three-quarters of that – 2.9 million tonnes goes to Japan and China. We could process just a quarter of that for our own needs, and you would have more jobs in the forest industry than you have now. For your sawn timber, 88% of all your sawn timber in Victoria already comes from plantations. We don’t need to log native forests to produce paper and woodchips because it can already come from plantations, and you don’t need to log native forests to produce timber products because almost all of it already comes from plantations.

During the last 20 to 25 years the native forest logging industry has moved to become an almost entirely woodchip- and paper pulp-based industry. That’s very high volume for very low value. We can actually see it in the budget bottom lines for all of these state-based agencies. VicForests, for example, has lost close to $100 million in the last decade or so. A recent report has shown that Forestry Corporation of NSW is also uneconomic. What this means is that the taxpayer is actually paying millions of dollars to have their forests cut down. At the same time, the logging of these forests has changed the fire regimes, making them more at risk of high-severity fires.

In fact, fire is now occurring so frequently in some of these areas that the forest is not growing to sufficient maturity to actually provide saw logs. Logging for paper pulp and woodchips creates a very young forest, which is more likely to reburn. Whenever it reburns it stays very young, and then because it’s young, it’s not old enough to produce saw logs, so it continues to produce pulp logs. So now we keep spiralling into a low-value, very high-volume, very expensive industry.

We also know that young forests generate a lot less water, and that threatens water security for places like Melbourne. Truly, the time for native forest harvesting in Australia is well and truly over.

If you look at the capital investment involved in maintaining one full-time equivalent job in the native forest logging industry, it’s pretty close to $5.04 million. For one full-time equivalent in the plantation industry, it’s one-tenth of that, at about $574,000. For comparison, for someone in an average job in non-forestry manufacturing, it’s about $272,000 of capital investment.

The Victorian Government decision to exit the native forest industry by 2030 has not been made because they’re environmentally sensitive. It’s not because they really care about what the public thinks, even though the vast majority of Victorians have wanted an end to native forest logging for almost two decades. It’s because there’s actually almost nothing left to cut. The true economics of this needs to be understood because the loss-making is phenomenal.

Who better to fight fires than logging contractors? They already have extraordinary heavy plant and heavy machinery skills. With a bit of forward thinking and some sensible decision-making, you can actually have more jobs, better jobs, more diverse industries, and a much better outcome.

Sometimes you feel like you’re being ignored, but from my perspective, it only means that you’ve got to keep trying harder. I’ve been doing this for 38 years now and if I have to do it for another 38, I will because it’s the right thing to do.

As told to Graem Sims for Cosmos Weekly.

Originally published by Cosmos as The end of native forest logging David Lindenmayer is professor at the Fenner School of Environment and Society at the ANU. He is a world-leading expert in forest ecology and resource management, and conservation science.