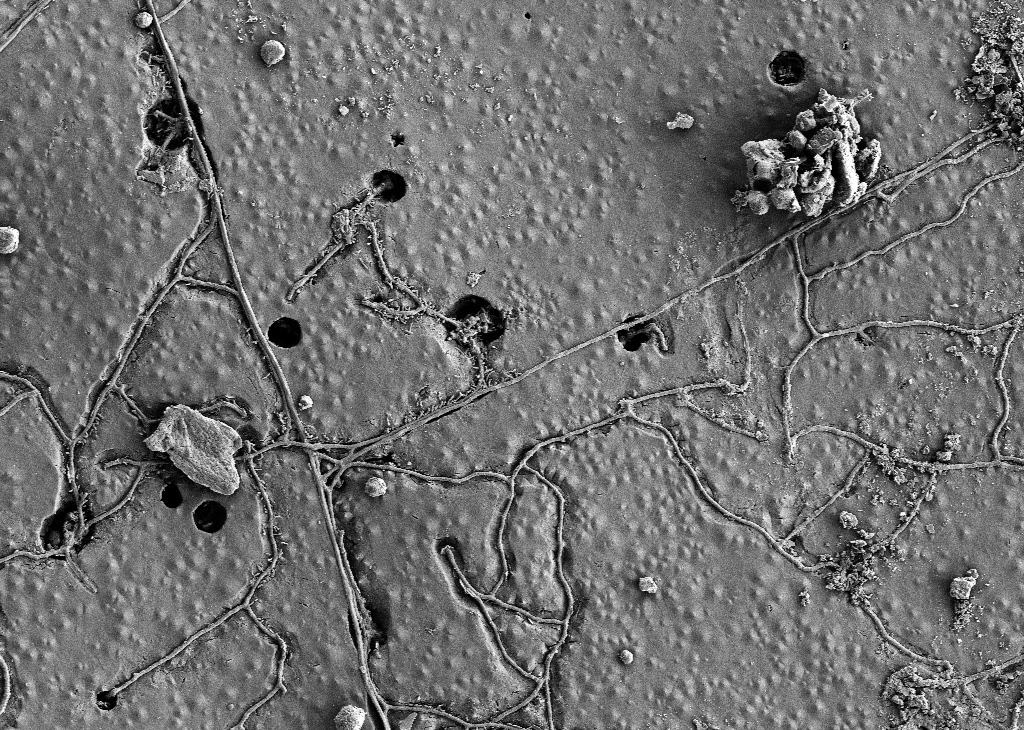 Soil microorganisms colonise and degrade a plastic film (composed of the synthetic polyester PBAT) that has been incubated in an agricultural soil for six weeks. Credit: Michael Zumstein

A kind of plastic called PBAT can biodegrade in soil, a new study has found. PBAT (or polybutylene adipate terephthalate) is widely used in agriculture, and though it has been suspected that biodegradation can occur in soil, it has not been conclusively proven until now.

The researchers, led by Michael Thomas Zumstein of ETH Zurich, say the study suggests that polyesters like PBAT could be a practical solution to alleviate detrimental plastic accumulation in the environment.

The widespread entry of plastics into the environment has generated profound discussion and debate, including around the reliance on plastic-based materials in agriculture, known as “plasticulture”. One example is the use of mulch films, which are placed on agricultural fields to improve soil conditions. Most mulch films are composed of non-biodegradable plastics and removed improperly after use, posing a threat to the environment. Mulch films made of polymers that biodegrade in soil are an alternative solution, and researchers have suggested that PBAT could be biodegradable based on changes in mass loss and physical-chemical characteristics it exhibits.

However, direct evidence of true PBAT biodegradation – including turning carbon from PBAT into carbon dioxide (CO2), or evidence of soil microorganisms incorporating PBAT carbon into their biomass – has not been achieved in agricultural soil, the authors say.

Zumstein and colleagues created three variants of PBAT using the carbon-13 isotope as a “label” to demonstrate biodegradation of PBAT in agricultural soil. After soil incubation for six weeks, they used isotope-selective nanoscale secondary ion mass spectrometry (NanoSIMS) to determine whether the carbon from the PBAT had been processed by the soil microorganisms. They found that soil incubation of all PBAT variants resulted in 13CO2 formation.

This, say the authors, confirms that soil microorganisms used carbon from all three forms of PBAT to gain energy. They say that future work should aim to assess variations in the rate of PBAT mineralization in different agricultural soils over a longer period of time.