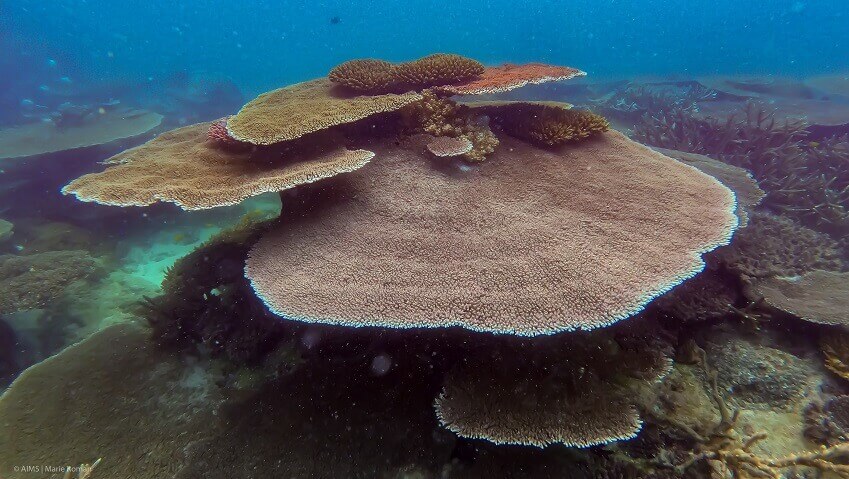 Table corals are big, flat reef engineers that can regenerate coral reefs on the Great Barrier Reef faster than any other coral type – but they need extra attention to remain alive, according to a study published in Conservation Letters.

The research team, led by Juan Carlos Ortiz of the Australian Institute of Marine Science, found that reef recovery would be a whole lot slower without these Acropora.

“Their large, flat plate-like shape provides vital protection for large fish in shallow reef areas and serves as a shelter for small fishes, with some species almost entirely dependent on table corals.

“Even after death these corals provide value, as their skeletons are the preferred place for young corals of all types to settle.”

Table corals, also known as plate corals, are found on upper reef slopes that get a lot of wave action, in the mid-shelf and offshore reefs in the Great Barrier Reef.

The team found that they are the most sensitive corals, despite their ecological importance, suggesting that they require some extra attention.

“Table corals are still frequently seen on outer reefs, but their presence shouldn’t be taken for granted as they are vulnerable to combined impacts,” says co-author Rachel Pears of the Great Barrier Reef Marine Park Authority.

“These corals do not handle intensifying thermal stress well, are easily killed by anchor damage, highly susceptible to diseases, and are the preferred meal for crown-of-thorns starfish.

“The good news is there are tangible actions we can take to protect these corals such as targeted crown-of-thorns starfish control and anchoring restrictions.”

While these corals help recovery, they may not necessarily promote biodiversity.

“We know table corals do a big service for these reefs, but it’s not a silver bullet for recovery,” says Peter Mumby of the University of Queensland.

“Protecting table corals could be part of a suite of actions that look at reef recovery, with other management focused more specifically on protecting biodiversity.”