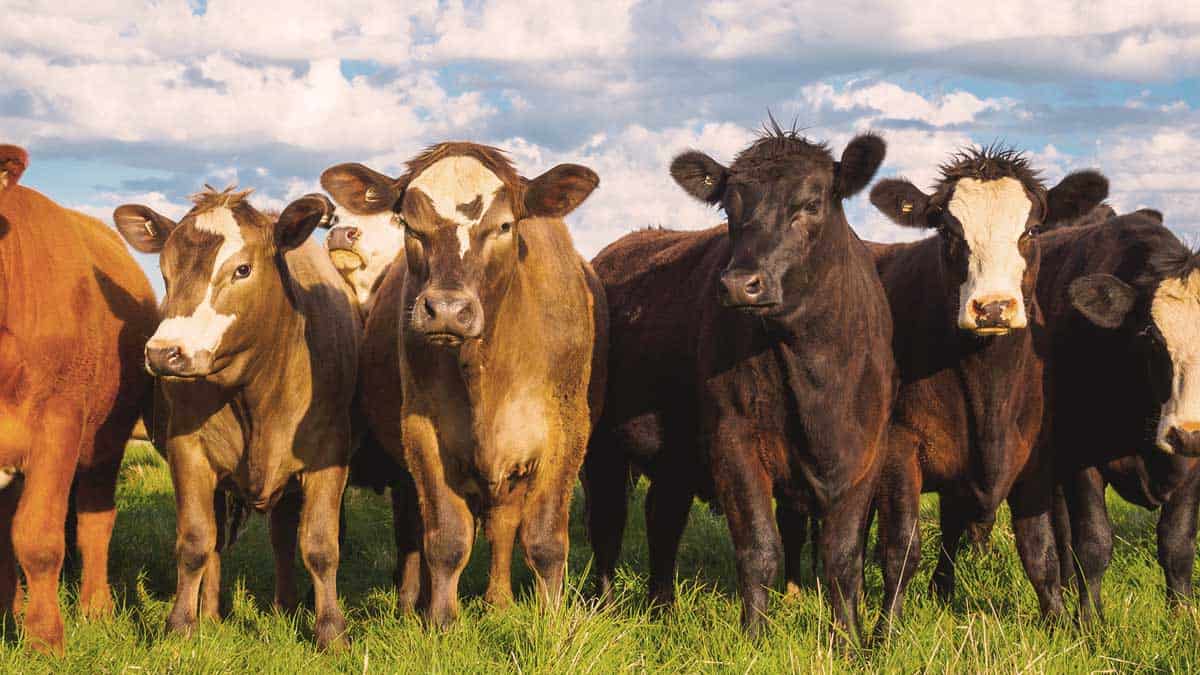 Within the familiar skins of sheep and cattle, computer-aided breeding is turbocharging evolution in humans’ – and the global climate’s – favour.

At the heart of climate change is an energy problem — the use of fossil fuels — through which is threaded another energy problem: providing fuel for people.

The global population is forecast to reach eight billion around 15 November and nine billion by 2040. Those people need food, even as the planet’s capability to produce food is being reduced by human pressure.

Most attempts to address this challenge are built around advances in technology, often with technological innovation as a profitable end in itself. But life itself has nearly infinite power to innovate. What happens when technology enables us to assist evolution for our ends?

Invisible to most people — even to many of the farmers whose viability they support — professional livestock breeders and the research ecosystem around them are using computer-aided data analysis and genomics to “accelerate evolution” and produce animals unlikely ever to be fashioned by nature.

The intensive poultry, pork and dairy industries, which operate in relatively controlled environments, have pushed furthest with this approach, but a similar evolutionary phenomenon has been happening out in the paddock. Even if it appears that the cattle and sheep grazing beyond the fence are unchanged, within these species’ familiar skins, their capabilities are evolving.

How livestock are changing, and how quickly, tells us something about how life itself holds some of the answers to humanity’s fate on a rapidly changing planet.

The Angus cattle stud Te Mania was founded in New Zealand in 1928 and spread to Australia in 1971 in the hands of the Gubbins family. On both sides of the Tasman the stud has sustained an intense focus on pushing the Angus genome as far as possible in the quest for better productivity.

Tom Gubbins, who with brother-in-law Hamish McFarlane runs the Australian Te Mania on properties in western Victoria, says his operation keeps records on 27 genetic traits of importance, all of which have to be kept in balance to ensure properly functioning animals.

One trait in particular demonstrates how far the stud has pushed the genetic envelope.

That trait is known in the industry as ‘600 day weight’ – a data-derived prediction of how much an animal will weigh at about 20 months of age (this, and all other beef cattle “estimated breeding values” are delivered through the massive BREEDPLAN genetic evaluation system).

When Te Mania started pushing for improved 600 day weights in the mid-1980s, the aim was to grow steers to “slaughter weight” by 20 months of age. The stud has now leaned hard on that trait through data-informed strategic breeding for the best part of 35 years.

The result: the offspring of a contemporary Te Mania bull will weigh about 100 kilograms more at 600 days than a mid-1980s predecessor would have.

“That’s an extra 100 kilograms of genetic capability the animals have gained in the last three-plus decades,” Gubbins says. “That 100 kilos means that animals can reach carcass weight 100 days earlier. And if an animal is reaching its potential 100 days earlier, that’s 100 days when the farmer doesn’t have to maintain the animal.”

In 2022, Australia will slaughter about six million head of cattle. A simplistic calculation suggests if every one of those animals needed 100 fewer days of feeding and growth, there would be 600 million extra days per year without cattle producing methane, and not requiring nutrition.

Even using the lower limit of a ruminant animal’s greenhouse-gas-producing potential – estimated at 250–500 litres per day – that’s 150 million tonnes of methane each year kept out of the atmosphere. Methane is more than 20 times more potent than carbon dioxide at trapping heat. That potential greenhouse-gas saving is sitting there in the bovine genome.

In the 1980s, while on a visit to the United Kingdom, John Keiller learned that UK sheep breeders were recording the performance of seedstock animals to better inform breeding programs. Back on the family farm at Cashmore, he started taking notice of ewe #928248, who each year consistently dropped twins or triplets while most of the flock delivered single lambs.

“I wondered, how do I get two of her? A dozen? A hundred, a thousand?” Keiller recalls. “I’ve shaken that question like a rat for more than three decades now.”

The rat-shaking has delivered. More than 30 years of subsequent performance-driven breeding means that Keiller now has several thousand versions of #928248 among Cashmore Park’s 20,000 stud ewes.

How that translates to productivity is summarised in the Sheep Genetics breeding value ‘Weaning Rate’: a data-driven forecast of how many lambs a ewe will give birth to, and which will survive through to weaning (‘Weaning’ refers to the point when lambs are removed from their mothers, which varies from 10 to 16 weeks age).

There is a buffet of genetic traits wrapped up in Weaning Rate: not only the ewe’s ability to give birth to multiples, but her ability to feed them and guide them to shelter in poor conditions, and the inherent vigour of the lambs.

The data tells Keiller that compared to 1990, he is now weaning 29 more lambs per hundred ewes.

Cashmore Park didn’t make any direct technological intervention to get that result: it was an evolutionary process, driven by data.

The same process has made Cashmore Park’s flock one of the most parasite-resistant in Australia.

Gastro-intestinal parasites plague the sheep industry. Decades of reliance on chemical treatments have bred gut ‘worms’ that are progressively becoming more resistant to every available molecule used against them.

The costs, in animal health, and the time and money spent addressing parasites, has influenced many farmers to abandon sheep in favour of less demanding enterprises.

But not all sheep are created equal in their vulnerability to parasites. Some animals are naturally resistant, which shows up as much lower worm egg counts in their faeces. The physiological reasons for this are not clearly understood, but the implications are: by using data-driven genetic selection, breeders can infuse their flocks with the genes for worm resistance.

That’s what Cashmore Park has done. Over the past 10 years, Keiller’s top 20 rams have collectively gone from being quite resistant to worms, to very resistant. Compared to the average of all relevant rams in the national Sheep Genetics database, this group of rams has moved from being 76% less susceptible to gastrointestinal parasites in 2011, to 91% less susceptible in 2021.

Keiller believes his stud ewe flock is possibly the most parasite-resistant in the country.

In the warm, damp conditions of the last two La Niña-influenced years, it is not uncommon for some eastern states’ farmers to ‘drench’ (chemically treat parasites in their flocks) every few weeks. Cashmore Park has now cut back to two drenches a year in adult sheep, an economy that Keiller has never experienced in 30-plus years of farming.

All this has Keiller thinking about how strategic breeding might create an ultra-low-input sheep. What if sheep were bred without tails? At the moment, that appendage is cut off lambs because of its tendency to promote fouling that attracts flies.

“Without tails, all you might have to do at lamb-marking is put an e-tag in their ears, and the next time you see them is when they go onto the truck for slaughter,” Keiller muses.

Computer-aided breeding of sheep and cattle is only a few decades old. The recent arrival of genomics is already accelerating the pace of evolution. Over the next 30 years, it’s likely that the familiar envelope of sheep and cattle will still remain unchanged, but what those familiar species are capable of will be – in the truest sense – extraordinary.

The Food and Agriculture Organisation (FAO) is firm that livestock are of “enduring importance” for the world’s agricultural systems and food security. Livestock turn huge areas of low-value or unusable plant matter into nutrient-dense meat and dairy, along with a range of other products — one of the reasons they have co-evolved with us for more than 10,000 years.

The evolution continues, but in a different operating environment. In the past, the value of livestock was accepted without question. Today, we urgently need those familiar animals to do their usual thing, but without causing further damage to our biosphere. The work of Australian scientists and breeders is suggesting: it’s possible. Matthew Cawood has written about agriculture and the environment for more than 30 years. He currently works in communications with the University of New England.