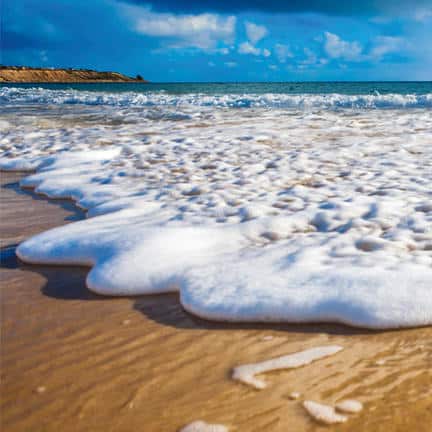 It’s early January, and the Sun is blazing. Sweltering in the hottest week of the past 100 years, temperatures well above 40 degrees, I’m seeking refuge at the local beach. The cool, calm sea provides a welcome relief. But some of the kids are disappointed, having brought their boogie boards expecting waves. These will come, but not until later in afternoon with the incoming tide. The kids are extremely confident of this fact. I can’t resist, so out comes my favourite question. “What causes the tides?” Oh that’s too easy – everyone knows it’s the Moon. Unanimous! But my follow-up is tougher: how come there are two tides a day? Puzzlement. In most places on Earth, there are two high tides each day. Why is it so?

To answer this, let’s first turn to our usual suspects. In the mid-17th century, Galileo suggested tides were caused by the motion of water as Earth circled the around the Sun. It was one of the rare occasions that Galileo got something wrong. Johannes Kepler, his German rival, was closer to the mark. Based upon ancient observations and correlations, Kepler thought the Moon must cause the tides. But Kepler’s theory could only explain one tide per day. Several decades later, Isaac Newton published his famous Principia. The book was most famous for describing the laws of gravity, and these same laws finally explained the tides.

When it comes to the effects of gravity, there are three major players we have to consider: the Earth, the Moon and the Sun. For starters, let’s just think about the Earth and the Moon. The Earth’s gravity tugs on the Moon; the Moon’s gravity tugs on the Earth too. As a result, they end up in orbit around each other. If they were the same mass, the centre of their mutual orbit would be half way between them. But the Earth is 81 times more massive than the Moon, so the centre of their orbit is much closer to the Earth – in fact it lies at a point inside the Earth about three-quarters the distance from the centre to the surface. So there’s the Earth and the Moon pulling on each other and spinning around each other.

The pulling very slightly elongates the shape of both spheres. But the distortion is trivial. On the other hand the Earth is covered by a thin layer of ocean, which is very easy to distort. As the Moon pulls on the Earth, the ocean bulges towards it.

But remember the Earth is also spinning on its own axis once a day. So once a day the kids at the beach are under the Moon, the bulging high tide, and the great swell that comes with it. But around six hours later, when the Earth has made a quarter turn away from the Moon, the ocean cover is at its thinnest: it’s a low tide and there’s little surf. Another six hours and the Earth has turned, so the kids and the beach are directly on the opposite side to where the Moon is.

There’s another high tide. How come? This tide is also caused by gravity, but acting in a different way. Remember the Moon is in orbit around the Earth, and that orbital motion creates an outward force. Think of being in a car as it takes a turn at speed. You are pressed to the outside of the car, experiencing a centrifugal force.

That’s what our oceans experience here. They also feel the force of the Moon pulling from the opposite side of the planet, but the centrifugal force wins out ever so slightly, enough to make the oceans bulge out again on this side. This pair of bulges is the Earth’s twin high tides, and they stay put, aligned with the Moon – it is the Earth and ocean rotating beneath them that causes the ocean to rise and fall twice a day in any given place.

It’s not just the Moon that pulls on our oceans. The Sun’s gravity affects our tides, too. For the same reasons given above it creates two bulges with an effect half as strong as that of the Moon. We notice the effect of the Sun with the large spring tides, when the Sun and Moon are lined up. About a week later there a the neap tides which are smaller tides that take place when the Sun is at right angles relative to the line of the Moon and the Earth.

Interestingly, the solid ground beneath our feet also rises and falls in tides, though this is much harder to see. One way scientists have observed it is through pressure variations in oil bodies deep beneath the surface, directly attributable to the Moon. And in many high-energy accelerators in which sub-atomic particles travel at near-light speeds in tunnels beneath the ground, we need to apply corrections to the magnetic fields that guide them to compensate for the physical distortion of the ground as the Moon passes overhead. In all of these systems, we see tides.

So what causes the tides? Gravity does.

Originally published by Cosmos as Why are there two tides a day?