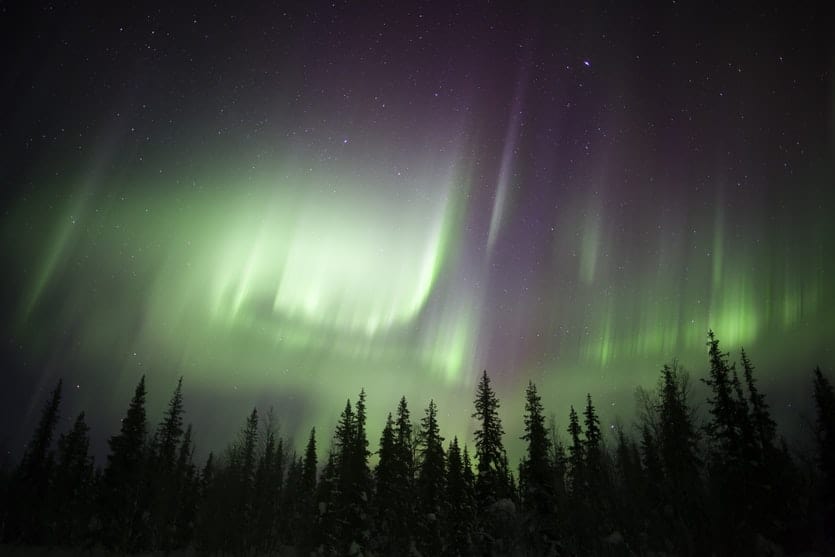 The Aurora Borealis spreads an eerie glow over a forest in Sweden. Credit: Justinreznick/Getty Images

The aurora is one of nature’s most spectacular light shows. It’s easy to be captivated by the beauty of the phenomenon, with massive bands of blue, green and red streaking across the sky. However, these stellar lights are indicators that the Earth is saving your life, protecting you from the deadly solar radiation spewed out by the sun.

The aurora is caused by the interaction between Earth’s magnetic field and charged particles shot out from the sun, dissipating them before they cause damage.

So how does the aurora occur, what is the magnetic field and why is it so important to life on Earth? Let’s find out.

If you play with a magnet, you notice that if you put it near a metallic object, it is more attracted at one end than the other. This is due to the forces of magnetism, where charged atoms that have unequal amounts of electrons and protons are attracted to the opposite charge and repel the same charge.

The magnetism is generated deep within the core of the planet. The Earth’s core is divided into two main parts: the solid inner nickel-iron core and the liquid outer core. It’s the movement of these two parts of the core that generate an electrical field, through electrically conductive metals and convection currents that move around vast amounts of liquid metal. This magnetism erupts from each of the poles and loops out, touching back down at the opposite pole.

This creates a bubble, known as the magnetosphere, that surrounds Earth and acts as a shield against solar radiation. The magnetosphere is not a perfect sphere as it is subjected to a massive “pushing” force by the solar winds. This forces the sphere into more of a teardrop shape, with the side facing the sun extending only 65,000 kilometres with a magnetotail believed to be than 6 million kilometres extending beyond the orbit of the moon.

So what causes the auroras to occur? Now that we know that Earth has a magnetic field we can see what happens to it when the sun turns violent. The sun is a very temperamental body, shooting out huge masses of charged material, often towards Earth, known as coronal mass ejections (this is detailed in our explainer on the sun, flares and CMEs).

These ejections contain deadly radiation that would kill off most life and turn what remains into a mutated mess. When these immense waves of radiation and charged particles are aimed at Earth, they hit and peel back the outer layers of the magnetosphere, exposing the lower layers. You would think that this would spell certain doom – if the CME can breach the magnetosphere it surely can reach us?

Fortunately Earth has a secondary defence system where it uses its magnetic field lines, which form part of the magnetic field, to direct the stream of particles towards the poles. How does this dissipate the energy coming in? Well, when the charged mass enters the upper atmosphere, it collides with oxygen and nitrogen atoms. These collisions impart the deadly energy into these atoms, exciting them and making them glow. This is why auroras are so bright, and allows the atmosphere to dissipate the remaining radiation before it can reach us at altitudes ranging from 100-400 kilometres up.

How do we know that the magnetic field is so important? We can see what happens when it isn’t there by looking at our planetary neighbour, Mars. Billions of years ago, Mars lost its magnetic field, leading to the solar winds stripping its atmosphere and any water on the surface boiling off. Today it has a very thin atmosphere and a barren and dry surface.

Earth is not the only place in the solar system where you can catch these light shows. We see the same thing happening on an even bigger scale on Jupiter and Saturn, with bands of light even larger than Earth itself. Both of these planets have powerful magnetic fields extending, in the case of Jupiter, to a size so large it would appear as being five times larger than a full moon in our sky!

So if you are lucky enough to catch an aurora as it streaks across the sky, spare a moment to think about how close you are to potentially deadly forces. The Earth’s magnetosphere is the key to life as we know it, and without it we would likely end up with a dead and empty wasteland like Mars.

Originally published by Cosmos as What causes an aurora over the poles?