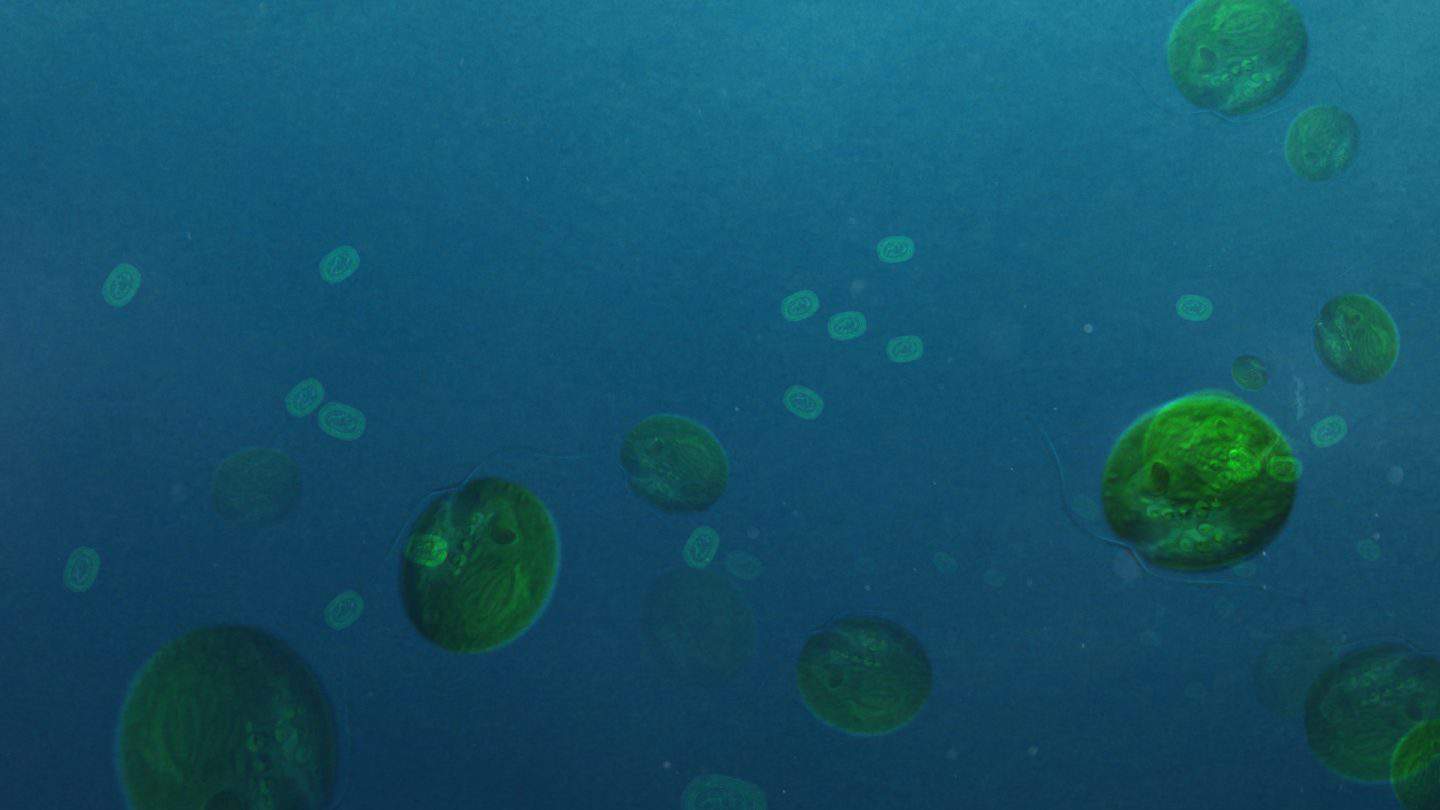 Algae alongside much smaller and less complex bacteria in the early ocean.

A pivotal step in the evolution of life on Earth was the progression from unicellular to multicellular organisms. This in turn required development from prokaryotes – the simplest single-celled creatures, like bacteria – to the more complex eukaryotes. For scientists eukaryotes are particularly sexy, not least because they enabled sexual reproduction, the great driver of species specialisation.

When and why eukaryotes bloomed to become the dominant productive lifeform in the Earth’s primordial oceans – creating the preconditions for more complex organisms to evolve – has remained a very big question.

There is a reason, after all, that bacteria came first: unicellular existence is simpler, efficient and resilient. Appearing about 1 billion years after the Earth’s formation, bacterial life monopolised the planet for at least 800 million years and continued to dominate for several billion more. So what changed to give multicellular creatures like algae their time in the sun?

Research from scientists at the Australian National University published in Nature may have an answer. The first piece of the puzzle was dating the “rise of algae” to 659–645 million years ago. It is a surprisingly narrow interval, falling between the Earth’s second-last and last great ‘snowball’ glaciation episodes, when the oceans froze and the planet’s surface was covered in ice up to several kilometres thick.

As much as ice-age conditions would seem inhospitable to life, the ANU research team led by Jochen Brocks and Amber Jarrett suggest the Earth’s penultimate snowball phase, known as the Sturtian glaciation, set the scene for the proliferation of algae. The towering glaciers ground down mountains and dumped a feast of mineral nutrients – notably phosphorus – into the oceans. There was too much for bacteria alone to devour, and algae thrived on the leftovers.

The Sturtian glaciation – the longest in Earth’s history – is named after geological evidence unearthed from Sturt River Gorge in South Australia. This new evidence comes from Australia’s Northern Territory. The scientists analysed ancient sedimentary rocks for molecular evidence of steroid alcohols, or sterols, which only eukaryotes can produce. They discovered a marked increase in steroid diversity and abundance that pointed to a rapid rise of marine planktonic algae.

“In these rocks we discovered striking signals of molecular fossils,” says Jarrett. “We immediately knew we had made a ground-breaking discovery that snowball Earth was directly involved in the evolution of large and complex life.”

After the Sturtian glaciation, high levels of carbon dioxide in the atmosphere meant that sea surface temperatures in the tropics could have reached 50 or 60 degrees Celsius, which is far too hot for algae. The researchers think this means that cyanobacterial picoplankton would have continued to dominate the tropics in this period, while algae blossomed further from the equator.

The increase in algae also increased atmospheric oxygen – which they produce through photosynthesis – and drove down the atmospheric carbon dioxide levels by burying carbon deep in the sea.

In time, larger algae could survive and form the base of a richer food web. They “provided the burst of energy required for the evolution of complex ecosystems”, says Brocks. The kind of ecosystems “increasingly large and complex animals, including humans, could thrive on Earth”.