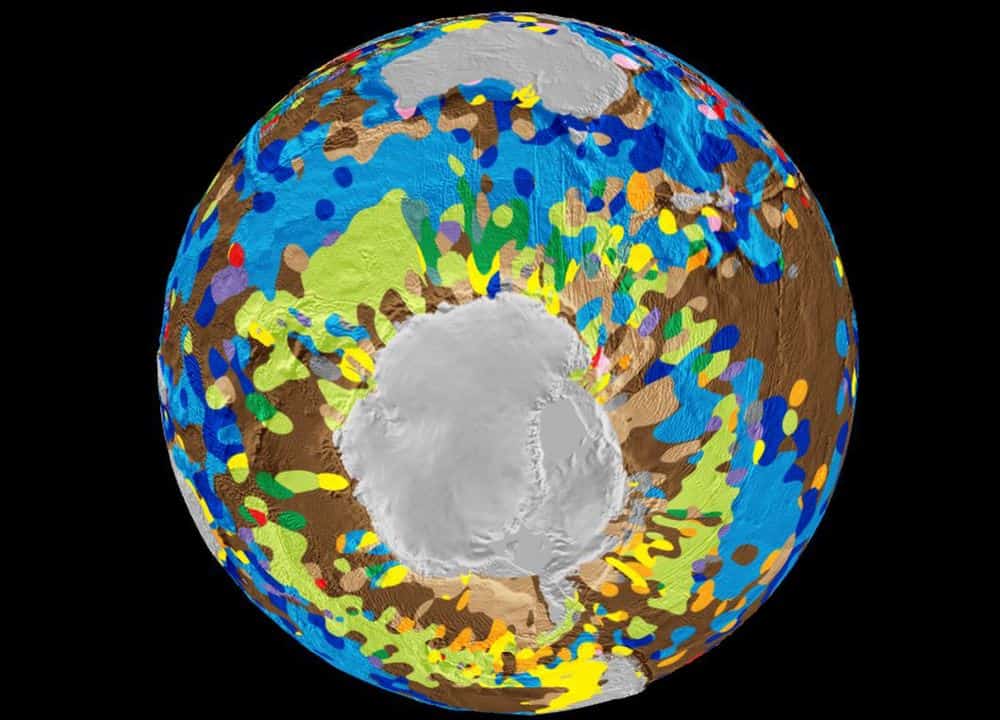 A still shot from the world's first digital map of the seafloor's geology. Credit: Earthbyte Group School of Geosciences, University of Sydney

Australian scientists have created the world’s first digital map of the composition of the floor of the world’s oceans. The most recent hand-drawn map of the seafloor’s geology was in the 1970s.

“In order to understand environmental change in the oceans we need to better understand what is preserved in the geological record in the seabed,” says lead researcher Dr Adriana Dutkiewicz from the University of Sydney.

Published in the latest edition of Geology, the map reveals the deep ocean basins to be much more complex than previously thought.

“The deep ocean floor is a graveyard with much of it made up of the remains of microscopic sea creatures called phytoplankton, which thrive in sunlit surface waters,” says Dutkiewicz. “The composition of these remains can help decipher how oceans have responded in the past to climate change.”

“A special group of phytoplankton called diatoms produce about a quarter of the oxygen we breathe and make a bigger contribution to fighting global warming than most plants on land. Their dead remains sink to the bottom of the ocean, locking away their carbon.”

“The new seafloor geology map demonstrates that diatom accumulations on the seafloor are nearly entirely independent of diatom blooms in surface waters in the Southern Ocean.”

“This disconnect demonstrates that we understand the carbon source, but not the sink,” says co-author Professor Dietmar Muller, also from the University of Sydney. More research is needed to better understand this relationship.

Originally published by Cosmos as The first digital map of seafloor