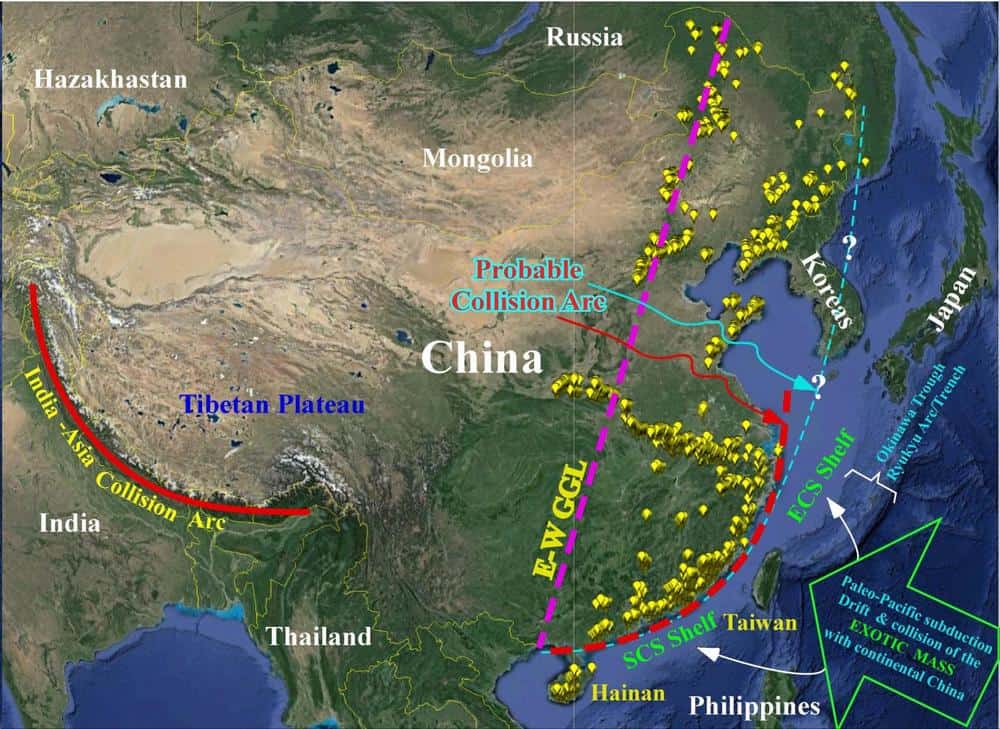 An annotated map of how it is believed the the Chinese continental shelf collided with the continent. Credit: Science China Press

They say in a paper published in Science Bulletin that the shelf is of “exotic origin” – perhaps an oceanic plateau or a micro continent – and was transported by, or along with, the paleo-Pacific plate in a northwesterly direction, subducting beneath the eastern margin of the continental China.

The curved arc-shape of the coastal line was probably caused by an arc-shaped trench that existed longer ago than 100 million years (the red dashed lined in the illustration above). The authors note that it is similar in both curvature and size to the India-Asia collision arc (red solid curve).

However, the scientists said that it was not straightforward to locate the collision arc in the northern section in the East China Sea and Yellow Sea because of a more recent (less than 20 million years ago) tectonic re-organisation associated with the opening of the Sea of Japan.

The provisional arc in that region is marked with a light blue dashed line with question marks in the illustration.

The scientists say that further testing is required.

This new understanding on the origin of the Chinese continental shelf introduces an innovative hypothesis for consideration and testing. Basement penetration drilling on ideal sites of the shelf in collaboration with industries and IODP is expected to offer the most effective testing towards a genuine understanding of the tectonic evolution of the greater western Pacific since the Mesozoic in a global tectonic context.

Originally published by Cosmos as Continental shelf ‘collided with China’