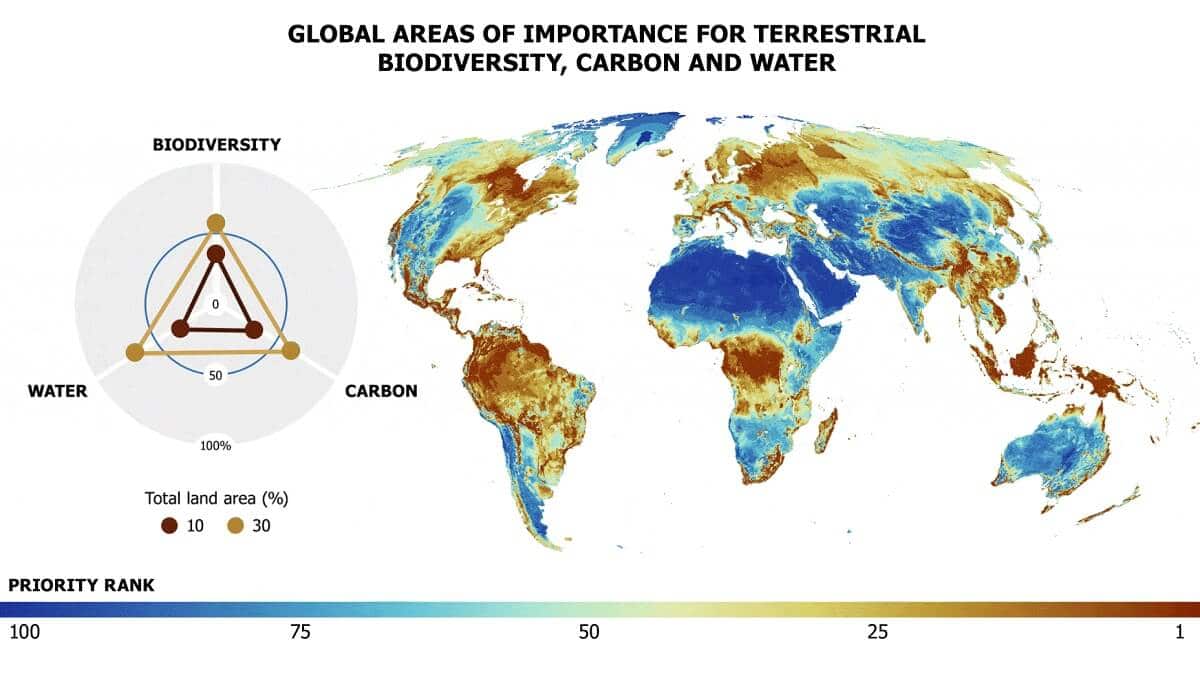 Humanity could protect 70% of all terrestrial plants and animals by strategically conserving just 30% of the world’s land, according to a paper in Nature Ecology & Evolution. Safeguarding the same 30% would also protect 62% of the world’s vulnerable natural carbon stores, and 68% of all clean water.

The study, carried out by the Nature Map consortium, aimed to find areas around the globe that are important hotspots for biodiversity, carbon storage (such as in trees) and fresh water combined. It has produced a range of maps showing the locations of the priority areas for the conservation of all three of these resources.

Read more: Climate and biodiversity loss must be tackled together

“Policymakers and governments need clarity on where resources and conservation management could bring the greatest potential benefits to biodiversity,” says Martin Jung, lead author on the paper and a researcher at the International Institute for Applied Systems Analysis (IIASA), which is based in Austria.

“At the same time, biodiversity should not be looked at in isolation. Other aspects such as conserving carbon stocks within natural ecosystems should be considered alongside biodiversity, so that synergies and trade-offs can be evaluated when pursuing multiple objectives.”

Co-author Piero Visconti, also at IIASA, says that quality of conservation – via effective management and good choice of location – is more important than the quantity of land conserved.

“To aim for quality of conservation and achieve the goal of safeguarding biodiversity, government and non-government agencies should be setting objectives and indicators for what they want: conserving species, healthy ecosystems and their services to people, and identify areas to conserve accordingly,” he says.

“Our study provides guidance on how to do that.”

High-priority areas in Australia included the eastern and northern coasts, Tasmania and south-west Western Australia. The researchers stressed, however, that their global-scale work should be used to assist local decision makers.

“This type of approach can support decision makers in prioritising locations for conservation efforts, and shows just how much both people and nature could gain,” says Lera Miles, co-author on the study and a researcher at the UN’s Environment Programme World Conservation Monitoring Centre.

“To be successful long-term, these areas must be managed effectively and equitably. That includes respecting the rights of, and empowering indigenous peoples and local communities.”