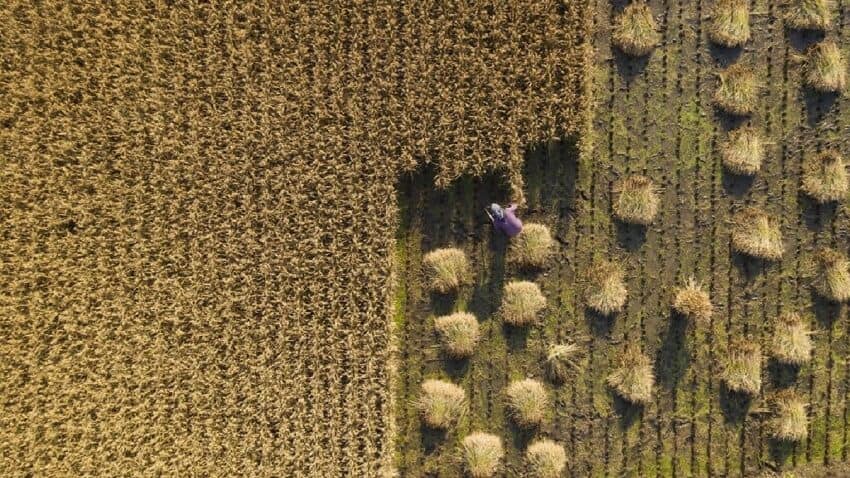 A Chinese-led team of researchers has found that ozone pollution is causing an estimated AU$87 billion in crop damage each year across East Asia, with major ramifications for future food security.

It’s common knowledge that ozone is an important part of the stratosphere, protecting our planet from ultraviolet radiation. But ozone is also present in the lowest level of the atmosphere – where it’s far more problematic.

Known as surface ozone, it’s created by chemical reactions between oxides of nitrogen and volatile organic compounds in the presence of sunlight. Both of these are emitted from the burning of fossil fuels in transport and industry.

Surface ozone is considered to be a greenhouse gas that directly contributes to global warming. But it’s also a pollutant, known to cause respiratory health problems in humans as well as vegetation and crop damage.

Concentrations of surface ozone have increased in the northern hemisphere since the first Industrial Revolution. But while recent regulations have led to levels decreasing in Europe and North America, they’re still increasing in developing countries, especially in South and East Asia.

The new study, published in Nature Food, investigated how surface ozone damages crops across these regions.

“East Asia is a hotspot of surface ozone (O3) pollution, which hinders crop growth and reduces yields,” the team explains in the paper. “Surface O3 poses a threat to food security due to its deleterious effects on crop production.”

But due to lack of observation and experimental data, these effects haven’t been fully understood.

So the research team set up 3,072 monitoring sites across Japan, China and South Korea to monitor staple crops – namely wheat, rice and maize.

They then compared observations to experimental data, and developed an ozone exposure-response relationship for these three crops. This allowed them to quantify crop losses.

In total, they estimated that the annual value of crop losses adds up to US$63 billion (AU$87 billion).

This study follows a 2017 paper predicting that if global warming and ozone pollution are not curbed, the US can expect to see a decline in wheat, maize and soybean production by 13%, 43% and 28%, respectively. That study found that ozone regulation can offset the decline, to an extent – a finding that is echoed in the new research.

The team call for pollution control of surface ozone across Asia, particularly in South and Southeast Asian countries such as India and Pakistan, where rice comes largely from domestic production rather than imports. They also call for the development of monitoring networks to gather more data – and possibly provide early warnings to farmers.

“Against the prospect of persistent food shortage in South Asia for decades to come, the rising trend of lower tropospheric O3 levels over India urges us to quantify the crop production losses and possible benefits of air pollution control,” the team writes.

“By developing monitoring networks of surface O3 throughout South Asia, we could demonstrate the risks of O3 pollution more convincingly than earlier studies.”