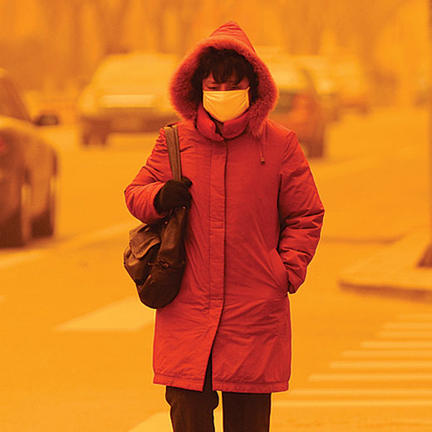 In two terrifying days in early July 2013, almost a metre of rain fell on China’s Beichuan County, causing catastrophic flooding. Raging floodwaters submerged the city of Qushan under seven metres of water, killing 19 people. It was the worst flood the mountainous region of southwest China had seen in more than 50 years.

For atmospheric scientist Jiwen Fan at the Pacific Northwest National Laboratory in the US and her colleagues, the storm looked to be part of a pattern. Extreme summer flooding has become more frequent in southwest China in recent years, as cities and industries have sprung up in the neighbouring Sichuan Basin. Fan and her colleagues have now calculated that the growing pall of pollution hanging over the Basin caused the extreme weather.

Simulating the Beichuan storm event in a computer model – first with clean air, then with the thick Sichuan Basin haze – the team found the heavy air pollution increased rainfall over the mountain region by as much as 60%. Their findings were published in Geophysical Research Letters in June.

“It’s an exciting result,” says Pablo Saide, from the University of Iowa, who is also researching the effect of air pollution on the weather. “The mechanism makes sense and is in line with recent research.”

In the Sichuan Basin, a choking yellow-brown pall from wood fires and coal hangs in the air most days. Fan’s models show the sooty particles absorb solar radiation, warming the atmosphere. This warm, stable pocket of air soaks up extra moisture that can fall as torrential rain when the air reaches the surrounding mountains. The pollution redistributes the rain from large areas of the plains to a narrow band at the foothills, resulting in heavy flooding, explains Daniel Rosenfeld, an atmospheric scientist at The Hebrew University of Jerusalem, who was involved in the study.

Pollution tends to peak during the week (when factories belch smoke and commuters clog the roads), influencing the weather the most on weekdays.

Fan and her colleagues are concerned the region may suffer more catastrophic pollution-induced floods – as will other parts of the world. They’ve already earmarked two other regions for modelling work: the Los Angeles Basin in the US, and the Ganges Plain in India have heavy air pollution and mountains nearby like the Sichuan Basin.

On 27 April 2011 a swarm of more than 120 tornadoes swept across the southeastern US, killing 313 people – one of the most severe outbreaks for more than 60 years. At the time, southwesterly winds blew smoke from the extensive burning of forests and fields in Central America into the region. Saide and his colleagues modelled the weather conditions leading up to the tornado swarm and showed that the smoke particles helped seed thicker clouds with lower bases. The underlying weather condition “was already very strong and was going to produce severe weather regardless of the smoke, leading to higher likelihood of tornado occurrence and intensity,” he explains.

But pollution doesn't always make the weather worse. Over the Atlantic and Pacific oceans scientists have shown pollution appears to weaken and delay the development of hurricanes and tropical cyclones. And because pollution tends to peak during the week (when factories belch smoke and commuters clog the roads), it influences the weather the most on weekdays. After analysing summertime storm data from more than 10 years across the US, Rosenfeld found that tornado and storm actvity tends to peak midweek, when pollution is at its worst.

Thankfully the weather-modulating effects of pollution can be reversed quickly – in contrast to global warming, another trigger of extreme weather. “Air pollution particles have a short lifetime, so any measures to cut down pollution can produce an effect within a short time,” says Ruby Leung, a colleague of Fan’s from Pacific Northwest National Laboratory. And cleaning up pollution is potentially easier and less expensive than tackling carbon-dioxide emissions.

In the meantime, the team suggests that incorporating atmospheric pollution into weather forecast models could help to predict some of this extreme weather, and give people time to prepare.

Also in Cosmos: Climate scientists are divided about what caused massive winter snow storms in the US