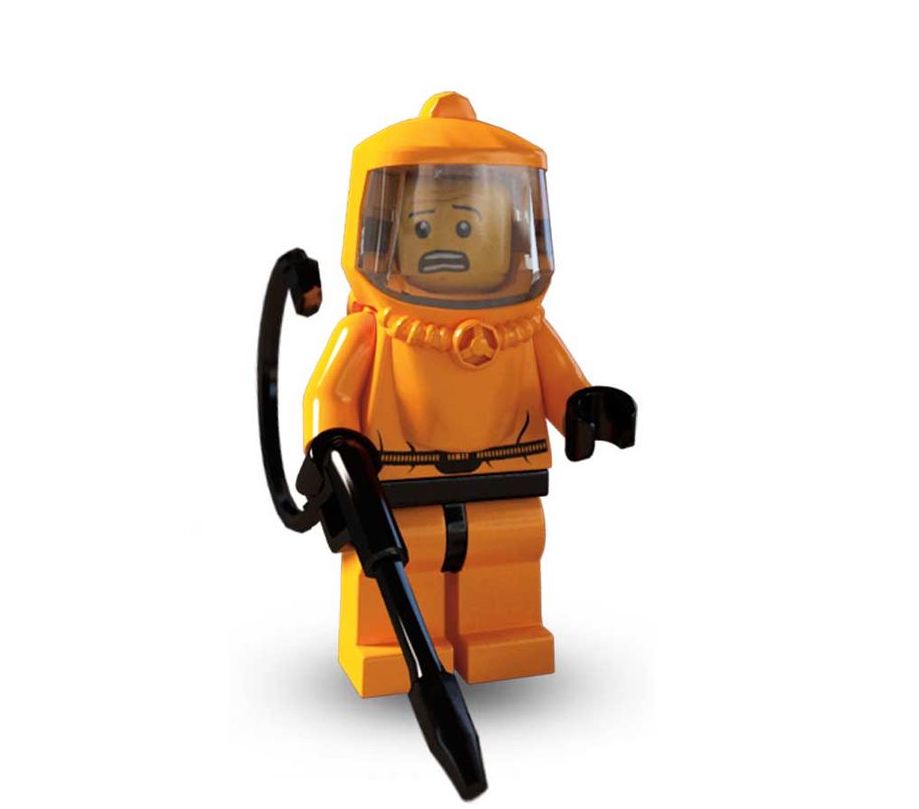 One of mankind’s most simple and playful creations could help sniff out one of its most complex and deadly, a new study shows. A team of researchers from the University of Texas in the US and Xi’an Jiaotong University in China has successfully detected and differentiated nerve agent mimics using an imaging device built of humble pieces of Lego.

Geographically and chronologically, little separates colourful plastic bricks from deadly chemicals formulated to asphyxiate. In 1934, in Denmark, a carpenter named Ole Kirk Kristiansen was established a toy workshop, naming it Lego (from leg godt, the Danish for ‘play well’). The company’s initial trade was in wooden ducks and blocks, but by 1958, the trademark binding bricks were patented, soon to take over the world of children’s play.

While Kristiansen was building his business, across the border in Germany a chemist named Gerhard Schrader was setting out to develop cheaper insecticides. Instead, however, he stumbled upon a formula so toxic he was hospitalised for weeks by exposure to trace amounts. An alarmed Schrader passed on his formula to the Wehrmacht, the German armed forces.{%recommended 7006%}

The military brass saw great death-dealing potential in the lethal substance, named ‘tabun’, and set about constructing a plant for its manufacture.

Soon, however, Schrader arrived at a poison deadlier still, an agent that would come to be known as sarin. Schrader’s discovery was never deployed in World War II, but has since been used to devastating effect in various attacks in the Middle East, and famously in the 1995 Tokyo Metro attack.

Tabun and sarin were later classified as the first two agents of the G-series of nerve agent, so named for their German origins. The second family is the V-series – the ‘V’ variously stands for ‘venomous’, or ‘viscous’ – and has been developed by, among others, the British, Russian and Chinese. V-series substances are particularly deadly because, unlike the G-series, they do not degrade easily and are difficult to wash away.

Both classes of nerve agent target enzymes that control the nervous system and can cause death in minutes or even seconds. Complicating matters, each requires different decontamination protocols and, as such, differentiating between them is as crucial as detecting their very presence. Failure to do so can have profound consequences, particularly given the ever-present loomng threat of terrorist attacks.

Unfortunately, the latest study, published in the journal ACS Central Science, found “few strategies have been reported for the detection of nerve agents demonstrating high sensitivity and quantitative accuracy, and with the ability to discriminate between the V- and G-agents, as well as an ease of operation that makes the entire analysis field deployable”.

The researchers, led by Texans Edward Marcotte and Eric, thus identified the need for a simple, compact device which can be cheaply assembled from common household items and speedily deployed. To meet this brief, they turned to Lego and a smartphone, constructing a dark-box from the former and using the latter as a camera.

“Admittedly, we could have used a 3D-printer to generate the box,” Marcotte explains, “however, Lego is a far easier medium from which to construct such a device.

“First, one does not need to generate a CAD file each time a new design is needed, and Lego can be reconfigured rapidly and on-the-go to suit the design needs of the user. Lastly, Lego can be disassembled into pieces easily housed in a portable bag.”

The resulting chemicals were then used to trigger a self-propagating cascade of reactions that amplify an optical signal resulting from a by-product of the decomposition of the agents.

The colour and intensity of emissions from the mixtures change relative to the amount of chemical weapon present, and these changes can be easily captured with simple technology and co-operative lighting.

The samples were then transferred to a standard 96-well test plate and moved into the Lego dark-box, where the changes were illuminated with an ultra-violet lamp, captured with the smartphone camera and analysed with free software.

Besides the blocks and phone, the lamp and test plate are the only other essential components in the system.

In addition to being quick, simple and cheap to use, the new method proved capable of quantifying amounts and distinguishing between different classes of agent present at contaminated sites. To encourage wide adoption of their technology, the researchers uploaded their analytic code, image guides, and a demonstration video to the source code hosting service, GitHub.

Further study, however, will be required to address the growing threat of third class of nerve agent. Known as the N-series, it comprises the agents dubbed in Russian as ‘novichok’ (‘newbie’) that were developed by the Soviet Union in the 1970s. One of these was deployed in the recent assassination attempt on ex-Russian spy Sergei Skripal and his daughter in Salisbury, UK in March 2018.