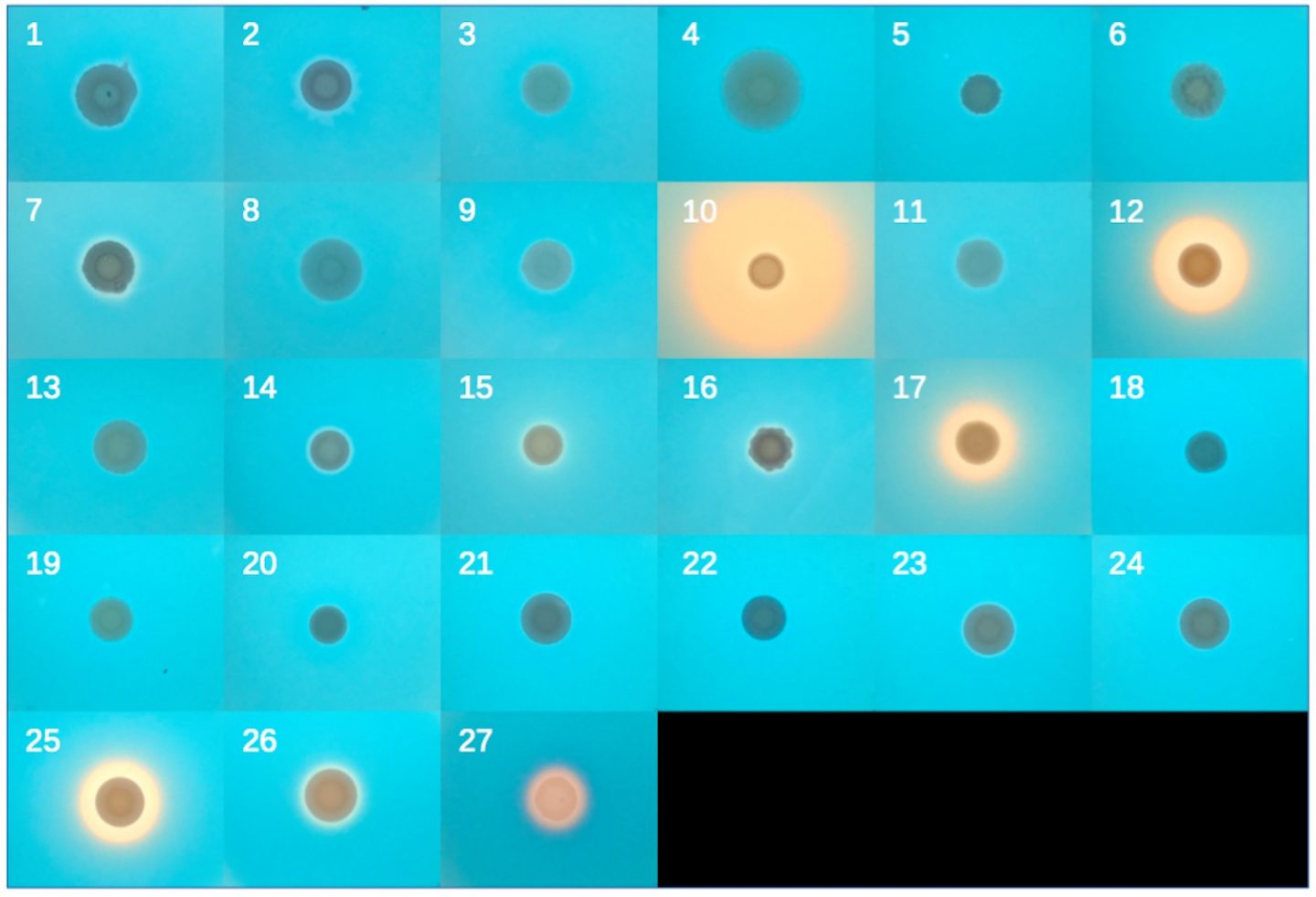 Grown on a dye that turns blue when it binds to iron, yeast that acquired a new ability to scavenge iron from bacteria turn the dye orange as they soak up nearby iron. Credit: Chris Hittinger and Drew Doering

The hijacking of a suite of bacterial genes by a single yeast cell led the evolution of several fungi species adapted to living inside insect guts, research has revealed.

It is one of the clearest cases yet found, the researchers suggest, of the transfer of genes from the bacterial domain to organisms such as fungi: in essence, the arcing over of one branch on the tree of life to donate genetic material to an altogether separate one.

The findings of the study, which involved collaborators from North America, The Netherlands and China and was led by Jacek Kominek and Drew Doering from the University of Wisconsin-Madison in the US, are reported in the journal Cell.

It all began when, as part of the Y1000+ Project to sequence the genomes of more than 1000 yeast species, Kominek and Doering were searching for genes that enable production of iron-scavenging molecules.

Such genes hadn’t been seen in yeasts before, but their luck was in. They found them in several species that live in the harsh and acidic environs of insect guts, and then traced their lineage back to a single transfer event in a single common ancestor yeast cell millions of years ago.

The seven genes it took on board had arrived as a “operon” – a package of multiple genes that function together. Common in bacteria, they are rare in fungi. The adoption gave the fungus, and its descendants, a crucial fitness advantage for survival inside insect hosts.

The researchers say that over the course of evolution, as the yeasts diverged, they made the iron-scavenging operon their own. They added tell-tale eukaryotic DNA elements, rejigged the expression of the seven genes, and even added fungal genes that also participate in scavenging iron.

“You have both bacterial and eukaryotic genes cooperating together, working together hand in hand,” says Kominek. “That’s pretty remarkable, I think.”

The evidence not only drove home, he and his colleagues suggest, that the gene transfer had happened, but also provided “a clear-cut case” for how the new genes helped the yeast to adapt.

“The idea of eukaryotes participating in horizontal transfer of genetic material is a relatively new thing, and there’s still people who are staunchly opposed to it as a phenomenon,” says Doering.

“And that’s partly because we’ve been lacking this clear home run case. So, I think one of the great things about our paper is it’s a nice big billboard in the sand that this occurred, and there’s all these different pieces of evidence that support that it’s real.”