Home ■ Popular ■ Why do cats have slit-shaped eyes? 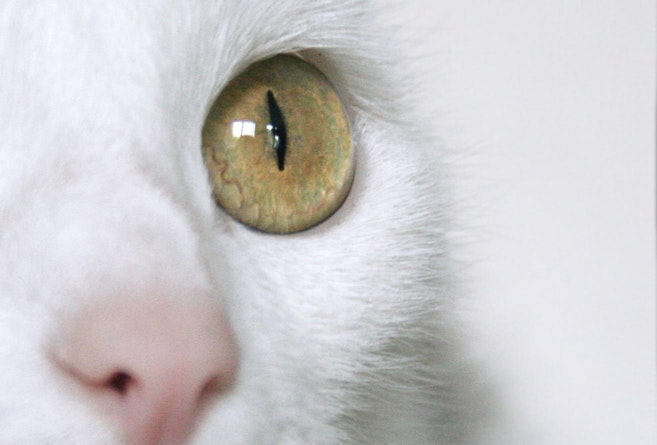 Ever wondered why cats have vertical slit-shaped pupils, while sheep have horizontal bars? A recent study suggests it has to do with their place in the food chain.

Martin Banks from the University of California in Berkeley and colleagues examined the eyes of more than 200 land animals and found their status as predator or prey was correlated to the shape of their pupils. Their findings were published in Science Advances in August.

Depending on the light, the shape of a domestic cat’s pupil changes from vertical slit to alluring almond to almost fully round. Like opening or closing theatre curtains, muscles on either side of the cat’s pupil open the slit wide or cause it to narrow. Overall a cat’s pupils can expand by 135-fold and can perform like built-in night vision goggles. By contrast human pupils expand by a factor of 15.

The slit-shaped pupil, with its remarkable light control, is how a cat can hunt in near-darkness, and also in bright daylight, says Ron Douglas, an animal vision biologist at City University London. Banks’ study shows the slit-shaped pupil is most often found in animals that hunt by day and night, and especially among predators that ambush their prey – including cats, snakes and crocodiles. Those that chase down their prey, such as cheetahs and wolves, tend to have circular pupils.

Like most predators, a cat’s eyes face forward. Their brain compares the slightly different images relayed from the left and right eye to help estimate distance – a process called stereopsis. We do this too – try walking down stairs with one eye shut.Why might being an ambush predator dictate the shape of your pupil? Because to pounce on a mouse, a cat must be superb at judging distance – and that’s where a slit-shaped pupil can help, says Banks.

Paradoxically, an alternative way to judge distance is to blur parts of the image. And for that, a wide open pupil is best – as any photographer could tell you. Set a wide aperture on your camera and while your subject will remain in focus, the foreground and background will blur. Predators also use this blurry, shallow depth of field to estimate distance.

But to use both measuring tricks at once, a cat would need a small and a large pupil at the same time. Impossible, right? Not if it is slit-shaped, Banks says: “We think the vertical slit is a really clever adaptation … It makes the pupil small horizontally and tall vertically. It’s really pretty cool.”

The effect works best in daylight, when the cat can contract its pupil to its narrowest.

With its horizontal bar-shape, a sheep’s pupil could not be more different from a cat’s. Banks found that most land animals with bar-shaped pupils were herbivores that had to keep a constant eye out for predators. Their horizontal pupils, in eyes placed on either side of their head, allow them to scan the horizon all around them for possible attackers.

Sheep spend much of the day with their head tilted downward as they graze. As their head pitches towards the ground their eyeballs roll like spirit levels keeping their pupils parallel to the horizon.

“That their eyeballs swivel like this means it must matter what their orientation is,” Douglas says. Banks suspects another benefit of horizontal pupils is to reduce glare form the overhead sun.

The self-levelling horizontal eye would also give sweeping views of the ground ahead – part of the reason, perhaps, why goats, sheep and horses are so surefooted across uneven terrain.

Round pupils like our own are less well understood. Humans are consummate generalists. Besides hunting and gathering, we require our eyes to detect intricate details such as facial expressions. “There’s more demand on our eyes,” Banks says. Perhaps there’s a trade-off – we forgo some of the light-controlling mechanisms of the cat, say, for eyes better suited to picking up colour and other details in the scene around us.

Banks also thinks our height might partly explain our pupil shape. Even among ambush predators, where slit-shaped pupils are most common, taller species such as lions tend to have round pupils. Banks thinks that may be because the blurry, shallow depth of field trick domestic cats use to judge distance is most effective at close range. The eye-to-prey distance of a cat poised to pounce on a mouse is much shorter than that of a lion poised to pounce on an antelope.

The winner of the most bizarre pupils, though, must be cuttlefish. Their bulbous eyes and distinct W-shaped pupils let them look forwards and backwards at the same time. The pupils can also dilate to an almost-perfect circle. Douglas suspects this geometry may explain why cuttlefish have one of the fastest pupil reflexes of any animal – about twice as fast as humans.