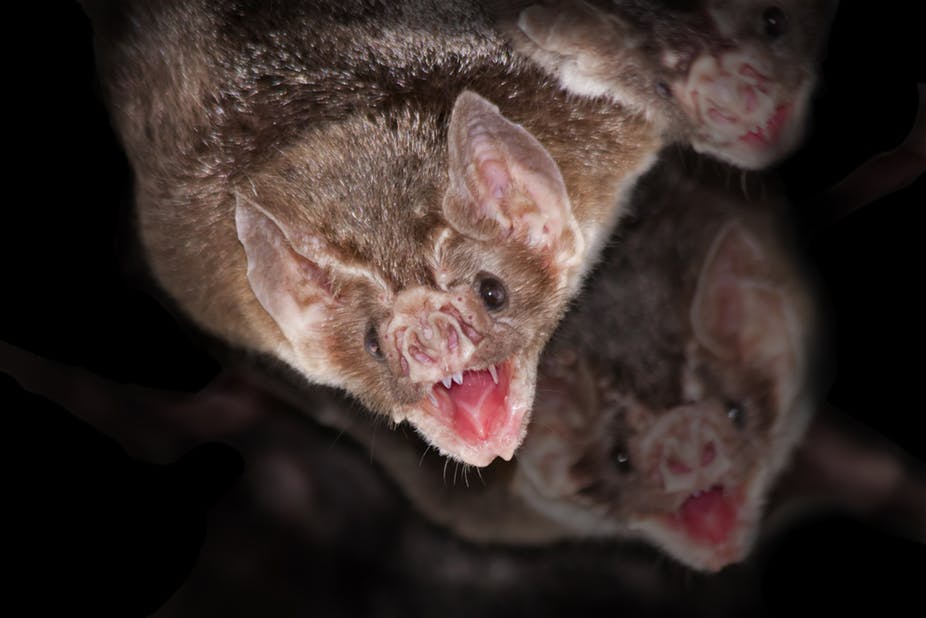 When asked to describe a vampire, most people think of a tall, pale creature, with fangs and a cloak. But were the creatures of folklore inspired by real traits seen in the animal kingdom? From avoiding sunlight to using a cloak, here are five classic vampire characteristics that exist in the natural world.

The primary characteristic of a vampire is feeding on blood. Although many ectoparasites such as mosquitoes and leeches also drink blood, the vampire bat is the only species of mammal that is truly haematophagic (feeds exclusively on blood).

Vampire bats prey on warm-blooded animals such as livestock, locating blood hotspots with their inbuilt infra-red heat sensors, and even utilise a protein called “draculin” to keep their prey’s blood flowing.

But they also need to feed every two days in order to survive, and finding prey this frequently is a challenge. Fortunately, vampire bats live in communal roosts, so have evolved a mechanism of food sharing whereby they regurgitate blood for starving individuals. This is often done in a tit-for-tat manner – so individuals that have benefited in this way will reciprocate later by donating to the bats that helped them.

Although vampires are often considered immortal, there are few animals that possess the same quality. Animals such as whales and sharks can live for over 200 years, and tardigrades (a tiny, water-dwelling creature) can exist in a state of suspended animation indefinitely – coming back to life when hydrated.

The immortal jellyfish, however, is reborn repeatedly. Rather like a caterpillar starting life as an egg and developing into a butterfly, the jellyfish begins life as an egg, develops into a larva, grows into a polyp, then buds into a medusa that grows to just 4.5mm when fully mature.

The jellyfish is “immortal” because it can change from a medusa back into a polyp when stressed. This “transdifferentiation” – reverting back to a previous form then redeveloping into the latter form – could aid our understanding of repairing and regenerating damaged tissues.

Although most medusae succumb to predation or disease eventually, this jellyfish has the potential to regenerate indefinitely, making it pretty much immortal.

Like many vampires, animals often avoid light. These tend to include invertebrates that prefer to inhabit dark conditions, or nocturnal species that are adapted to feeding at night. Nevertheless, there are a few species that are hypersensitive to light and actively avoid it at all costs, including some cave dwellers that spend their lives in permanent darkness.

Perhaps one of the strangest-looking creatures is the naked mole rat, which inhabits underground burrows in Africa. Like vampires, they are pale, avoid sunlight and are known for their longevity. They also possess a colonial lifestyle, similar to ants and bees – workers acquire food, maintain the tunnel system and protect the nest of the breeding queen, akin to a vampire sire.

Vampires are often depicted with heightened senses such as vision and hearing. But many animals have also evolved super senses far exceeding those of both humans and vampires.

Vampires, for example, seem to have a particularly keen sense of smell. This characteristic is mirrored in animals such as bears, which can smell food from up to 18 miles away.

Although it is often stated that sharks can smell a single drop of blood from a mile away, this is an exaggeration – it is more like a single drop in a swimming pool. Nevertheless, sharks have nostrils that give them a directional sense of smell, allowing them to pin-point prey with incredible accuracy. Their nostrils also have only one function: to detect odours. Perhaps undead vampires have such an impressive sense of smell because they don’t have to breathe either.

Vampires can also morph into another form, such as a bat, often behind the shroud of a cloak. Species such as the mimic octopus are similarly capable of changing shape to avoid a tricky situation. Unfortunately, they can’t turn into a bat and fly away, but this is essentially what a caterpillar does when it morphs into a butterfly and flutters skywards – although this process takes them weeks rather than an instant.

Like vampires that disappear in a puff of smoke, squid are also capable of producing clouds of ink – confusing predators and creating the illusion that they have vanished.

But what about the cloak? Nothing resembles a textbook vampire quite like the black heron. These birds create a cloak of plumage around themselves, forming a shadow that both enables the birds to see prey in the water, and creates a dark trap that fish dart into, assuming it’s cover.

There are many animals that possess vampiric qualities, so it is likely that stories of vampires or mythical blood suckers, such as the chupacabra, are based, in part, on these characteristics.

And they all have one more thing in common, too: all can be killed with a stake through the heart.