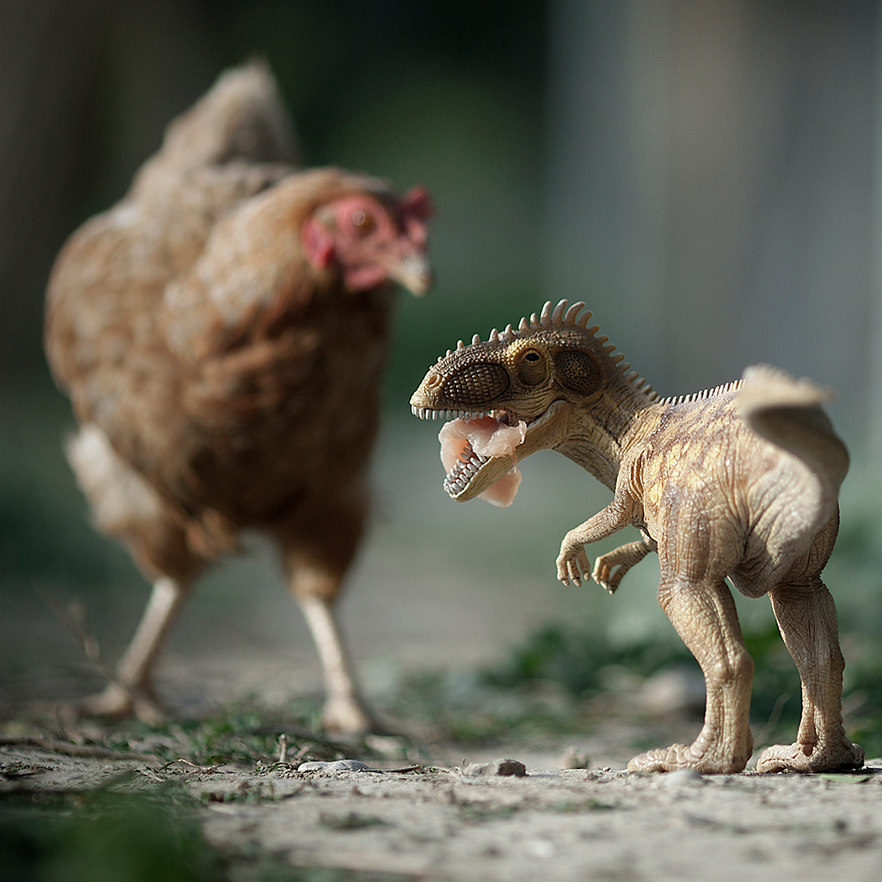 Some things look very scary, and some things don’t.

The eight-tonne Tyrannosaurus rex thundering down the road in Steven Spielberg’s Jurassic Park was scary. An eight-tonne chicken filling the same role? Not so much.

This discrepancy, however, is more than a little odd, because it is quite possible that the real T. rex did indeed blunder along with a gait quite similar to that of a Rhode Island Red – a bird that is, after all, and if only in the broadest of senses, its descendant.

Despite widespread and ongoing interest in all things dino, how the two-legged varieties known as theropods actually moved has been an area of comparatively sparse research.

Now, however, a team of researchers led by geoscientists Peter Bishop from the Queensland Museum in Brisbane, Australia, has attempted to shine a light on the question by investigating the locomotion of modern birds.{%recommended 5464%}

And the researchers have been doing this using a strategy that seems quintessentially Aussie: they rounded up a whole heap of birds and sent them around a racetrack.

In a paper published in the journal PLOS One, Bishop and colleagues detail the dozen bird species used in their experiment. They range from the tiny Chinese painted quail (Coturnix chinensis), weighing just four grams, all the way up to a 74-kilogram ostrich (Struthio camelus) – comprising a 1780-fold range of body mass.

Other species included chicken, turkey, emu and the Australian white ibis (Threskiornis moluccus), an opportunist feeder so common in some cities that it has been nicknamed the “bin chicken”.

To test how the birds ran, the scientists constructed two circular racetracks – a small one under cover to accommodate the three tiniest species, and a larger outdoor one for all the rest.

Both tracks were completely walled in, with the inner most wall constructed of either fine mesh or transparent acrylic sheets. Behind these were cameras that recorded at between 50 and 250 frames per second. The floors were inset with pressure plates, covered in fine grit.

Before being set onto the tracks, the birds had the feathers on their backs removed, to permit the positioning of small markers that allowed the cameras to be properly aligned. Wings were also clipped, to allow unobstructed camera vision (and, presumably, to prevent the species capable of flight from lifting off and ruining the shot).

Once everything was set, the birds were let loose and encourage to run around the track. The researchers looked at a wide range of variables, particularly those related to kinematics – the motion of the birds – and the ground force reaction – the amount of force exerted as gait speed increased.

The results were compared to data gathered for humans walking and running. Once all the numbers were in, Bishop and his team developed algorithms to predict how the movements of birds of different sizes reflected the likely locomotion of theropods.{%recommended 958%}

One common factor quickly became obvious. While humans speeding up go through obvious gait changes – switching from walking to jogging to running – birds, and probably thus dinos, do no such thing. Instead, their gait speeds up in a continuous fashion without changing its mechanical expression.

The researchers found that size was important in other aspects of locomotion, with larger birds adopting a pronounced “crouch” as they ran faster. “Thus,” they write, “at equivalent speeds, a small theropod will be moving in a decidedly different fashion to a large theropod.”

The research may well be of interest to Steven Spielberg, should he decide to further extend the Jurassic Park franchise. Of more paleontological concern, however, is the insight the findings provide regarding fossil dinosaur footprints.

Bishop’s team suggest that the study “raises concerns” about the accuracy of the way such footprints have been interpreted, “in terms of inferring the posture and gait of the trackmaker”.