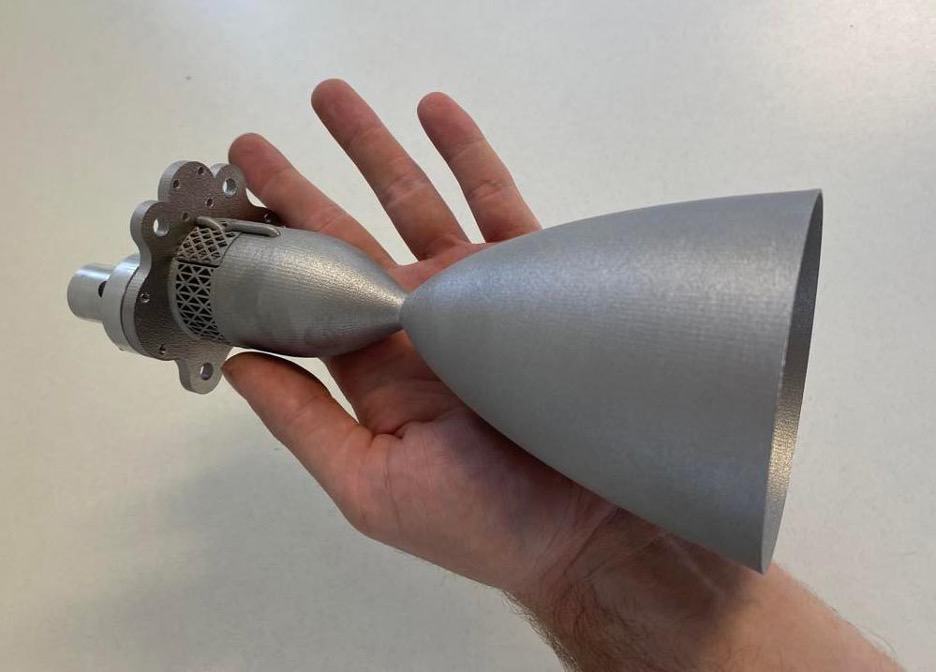 The Valiant VS-1 thruster, which uses non-toxic nitrous oxide and propane in an effort to clean up the space industry, and reduce handling and construction costs on Earth.
More on:
SpaceX

Keeping things simple is often the best solution. In the case of Valiant Space, it’s triggered a chain of events that both cleans up the rocket industry and dramatically reduces costs.

The Queensland-based startup is developing a simplified satellite thruster that doesn’t rely on carcinogenic fuels.

Last year, it received a $200,000 grant under the Federal Government’s Moon to Mars Initiative to prove the concept. That testbed, the VS-1, will be launched aboard a SpaceX Falcon 9 mission later this year.

It’s a rapidly expanding market. From just a few dozen launches a decade ago, new satellites will soon be numbered in the thousands each year.

Such a staggering pace of expansion has sparked calls to regulate everything from reflectivity (for light pollution) to re-entry (to avoid creating a centuries-long obstacle course) and materials (to minimise the risk from pollutants).

This, along with the eternal quest to cut cost, size and weight, is driving innovation.

Electric thrusters – burning metals or inert gas – bypass toxicity concerns, but they provide gentle, consistent thrust. They’re not as responsive as chemical thrusters, which is why chemical fuels still have a place.

“It’s sort of like a Titanic scenario – you really don’t want to be slowly moving towards your demise on that iceberg because your rudder isn’t strong enough,” says Valiant Space CEO Andrew Uscincki.

But existing chemicals are problematic.

“For a long time, the space industry’s had a mentality of ‘if it’s not broken, don’t try and fix it’, because if it works, it works,” Uscincki says.

Times, however, are changing.

“There’s a new space mentality emerging,” he says. “Businesses are taking on new technologies because it’s needed to support the industry’s growth.”

“You’ve got those already industrially produced, easily available, and a lot of industries that use them,” Uscincki says. “And that sort of logistics aspect significantly reduces the cost.”

They’re also nowhere near as toxic as traditional space fuels.

“Those other more esoteric chemicals are already experiencing more heavy regulation just because of the impact they have on the environment and people,” Uscincki says. “So our intent was to balance the need to move away from those previous propellants, but also to meet performance requirements.”

The toxicity of fuels such as nitric tetroxide, monomethyl hydrazine and hydrogen peroxide makes them difficult and expensive to handle on Earth. It also makes them dangerous when being shot into orbit.

“I know that China still uses red fuming nitric acid on a lot of their launch vehicles,” says Uscincki. “They do inland launches and let their lower stages just fall onto villages and farms. And you can see these toxic red fumes surrounding the wreckage.

“The sort of work we’re trying to do is help the industry move away from that.”

Nitrous oxide and propane are an explosive mix.

But the construction and handling processes are far safer, and the outcomes similar – if not better – than traditional toxic fuels.

So why has it taken so long to exploit these advantages?

“It’s actually driven by the lack of flight heritage – the difference between buying a thruster that’s relatively new to the market versus ones which were developed in the ’60s and have a very long track record,” says Uscincki.

This is why the demonstrator flights are so important.

“We can get comparable, if not sometimes even better performance, than hydrazine and other toxic counterparts because we can build a much simpler system,” he explains.

Those gases often need complex pressure regulators, insulation and containment systems, which increases the mass of the entire thruster system.

They can also have degrading performance as circumstances change with use.

“With our propellants, the way that we store them in the tanks and the way that they act means they essentially maintain a constant pressure throughout pretty much all their mission life,” says Uscincki. “That means that we’re able to provide a consistent thrust level. And we don’t need to supply additional pressurisation and the like. So, complexity-wise, we save a lot of mass and risky components.”

Valiant Space has just been awarded a further $750,000 from the Federal Government to expand its manufacturing capability to supply domestic and international customers.

Uscincki says much of this money will be spent on automated lathes and mills to make valves.

Thruster nozzles and injectors are essential, and complex, design components, but they involve no moving parts and can be easily assembled through 3D printing.

The riskier components are the valves that regulate the gas flow out of the tanks.

“So that’s the test we’re doing – the launch we’re doing later this year is really about proving our most mechanically complex part,” Uscincki says. “And it’s one we’ve developed entirely in-house.”

Space-rated valves aren’t easy to come by. And they are usually built by large organisations used to working on big contracts. That makes them very expensive.

“When we realised that these were going to be something we had to have, we decided to make them ourselves,” Uscincki says. “We’ve ended up reducing that cost significantly”.

Again, the design was simplified.

That makes Valiant Space’s valves cheaper to produce. But it also means they have fewer points of failure.

“We’ve recently done about 100,000 actuation cycles on that valve to make sure it can operate in extreme environments,” he says.

But the only test that counts is conducted in orbit. Watch this space.