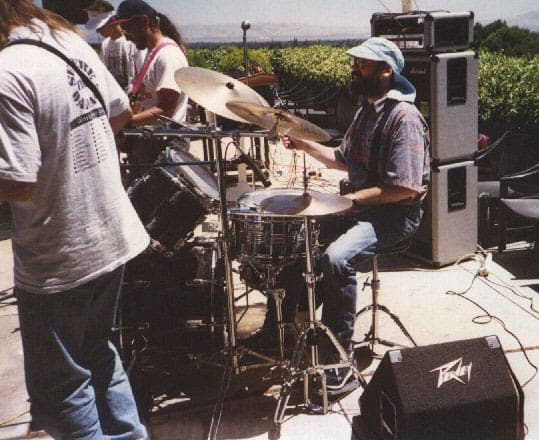 Mark David Weiser, born on July 23, 1952, played drums in the rock band Severe Tire Damage, which on June 24, 1993, became the first music act to broadcast one of its performances live on the internet, on an experimental network called MBONE (an awkward contraction of “multicast backbone”). According to a history of the platform, the show was broadcast live, “both audio and video. The band was seen and heard live as far away as Australia.”

Along with his musical activities, Weiser was also the chief technology officer of the Xerox Corporation’s renowned Palo Alto Research Centre (PARC), one of the pioneers of California’s Silicon Valley, the area in which companies such as Apple and IBM were creating the technology that is ubiquitous to so much of our lives today. He and his colleagues proposed a world in which “computers in light switches, thermostats, stereos and ovens will be interconnected in a ubiquitous network”.

Weiser died in 1999 after battling liver cancer. In his obituary, the New York Times wrote that In Silicon Valley, “the nation’s high-technology heartland, Mr Weiser was widely viewed as a genuine visionary and computer pioneer, and his ideas have influenced many of the world’s best computer scientists”.

In 1988 Weiser coined the term “ubiquitous computing”, which he describes in a 1991 paper as “integrating computers seamlessly into the world”.{%recommended 7299%}

“‘Ubiquitous computing’ in this context does not just mean computers that can be carried to the beach, jungle or airport,” he writes. “Even the most powerful notebook computer, with access to a worldwide information network, still focuses attention on a single box.”

In a 2010 story in Computerworld magazine, Todd Weiss says: “For 40 years, the Xerox PARC has been a place of technological creativity and bold ideas. The inventions it has spawned, from ethernet networking to laser printing and the graphical user interface, have led to myriad technologies that allow us to use computers in ways that we take for granted today.”

In his 1991 paper, Weiser elaborated on his vision for ubiquitous computing. He likened it to writing, “perhaps the first information technology”. Books, magazines and newspapers convey written information, as do street signs, billboards, shop signs, and even graffiti. “The constant background presence of these products of ‘literacy technology’ does not require active attention, but the information to be conveyed is ready for use at a glance.”

However, silicon-based information technology is far from having become part of the environment.

“More than 50 million personal computers have been sold, and nonetheless the computer remains largely in a world of its own,” he explained.

“It is approachable only through complex jargon that has nothing to do with the tasks for which people actually use computers.

“My colleagues and I at PARC think the idea of a ‘personal’ computer itself is misplaced, and that the vision of laptop machines, dynabooks and ‘knowledge navigators’ is only a transitional step toward achieving the real potential of information technology.”

Weiser saw computers in light switches, thermostats, stereos and ovens that helped “to activate the world. These machines and more will be interconnected in a ubiquitous network.”

Originally published by Cosmos as This week in science history: Rock drummer who conceived the Internet of Things is born