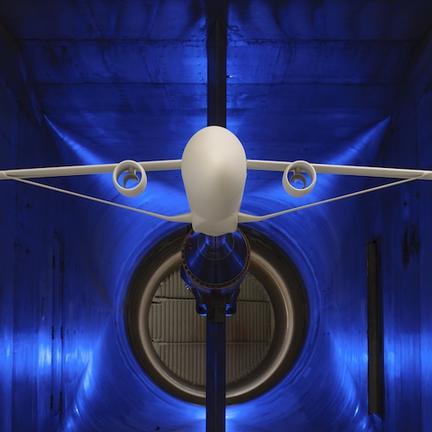 NASA and Boeing are developing a super-thin aircraft wing that they say could cut fuel bills in half.

The wing is so light and thin it needs a truss to support it structurally.

The researchers say the lower drag from the truss-braced wing will cut fuel consumption by at least 50% over current technology transport aircraft, and by 4% to 8% compared to other advanced technology conventional configurations.

Engineers are analysing results from a recent test and plan to further explore the wing design.

The wind tunnel testing used a 4.5%-scale model with a 2.35-metre wingspan. At full scale, this would represent a span of approximately 52 metres compared to almost 36 metres for a winglet-equipped 737-800.

“We think based on this size and this shape the TBW configuration ought to be a good candidate for a future airliner design,” NASA Langley Research Center aerospace research engineer Greg Gatlin told Aviation Week & Space Technology.

He said one of the main issues with the design was the air flow between the wing and strut.

“As they come together, there is interference and one influences the other, so a shock can set up in there and cause drag. That’s the main thing we are looking for,” he said.

“We think we’ve minimised those effects in this particular shape, but we want to look at it more carefully with pressure sensors and pressure-sensitive paint to see if there are separations and other flow phenomenon going on that maybe the computations haven’t captured.

"We don’t want to have separated flows caused by the presence of the strut interacting with the bottom of the wing.

"We are looking at the outer mold line, so from a structures point of view we are realistically looking at where it is appropriate for the structure to attach to a spar or ribs within the wing. It has to be able to carry an appropriate amount of load, which will drive thicknesses and shapes as well.”