Home ■ Technology ■ The smallest sculptures ever made 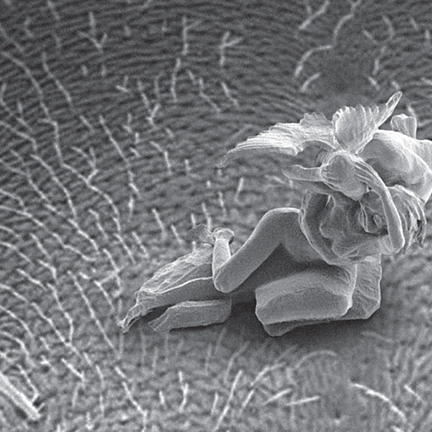 A close-up of Cupid and Psyche on the head of an ant.

Technology has long supplied artists with tools they can use to express themselves – even at times giving birth to new art forms. South African artist, engineer and entrepreneur Jonty Hurwitz has used his technical skills to create a form unlike any seen before – and one that can’t even be seen with the naked eye. Hurwitz is the creator of the nanosculpture – a miniscule model of a human the full detail of which can only be observed with a powerful scanning electron microscope.

“Trust”, a nanosculpture of the female figure, is the smallest creation of the human form ever made. It measures about 80 x 100 x 20 micrometres. Just how tiny that is can be seen in the image of the eye of a needle above, but to compare, a human hair is about 100 micrometres thick.

It took Hurwitz, who now lives in England, 10 months to produce his tiny artworks through a complex production process. Human models were photographed by 250 cameras rigged up inside a warehouse in Sussex using a technique known as photogrammetry. Then he moved from lab to lab with each stage of development, until the imperceptibly small figures were ready to be made.

The nanosculptures were formed at the Karlsruhe Institute of Technology’s Institute of Nanotech in Germany, using a new 3D printing technique called multiphoton lithography in which a polymer resin is hardened by tightly focused zaps of infrared light. The picture below shows scientists at work constructing the nanosculptures on a “nanoscribe” machine in a sterile laboratory.

A chamber within the printer is filled with light-sensitive polymer. This is zapped with near infrared radiation (NIR) focussed through a microscope. The process solidifies the polymer at one very small focal point, known a 3D pixel or voxel. The nanosculpture is created using a computer-controlled process that proceeds very slowly, assembling each voxel and then each layer, almost like molding digital clay.

Another nanosculpture, “Cupid and Psyche”, shows the miniscule figures of Hurwitz himself along with his nano muse, Yifat. It was inspired by Antonio Canova’s “Psyche Revived by Cupid’s Kiss”, which can be found in the Louvre. This sculpture measures 100 x 90 x 100 micrometres and can sit on the head of an ant.

A third nanosculpture (below) is called “Intensity”, and features a jumble of female figures that seem to spill and tumble over one another.

In a video on his YouTube page, Hurwitz remembers when he first received the package of the finished nanosculptures in the mail. He could barely get his arms around the box, with smaller and smaller boxes inside, like the layers of a Russian doll nestled in bubble wrap and tape. Finally, he reached the smallest of the boxes, as small as a jewellery case, and opened it up – to find nothing but a small mirror.

He examined it carefully, holding it up to the light. He angled the mirror just so, and at last he saw them – seven small specks, no larger than the dust particles suspended in the air around him, but arranged in a thin straight line.

It wasn’t until he looked through a scanning electron microscope that he could actually see his creations.

The story doesn’t end there.

Hurwitz, Yifat and a small team of scientists spent hours viewing each of the seven nanosculptures anchored to the mirror. But when the mirror was taken out of the scanning electron microscope to be rotated at a different angle, tragedy struck – all the nanosculptures were lost when someone’s finger accidentally pressed against the face of the mirror.

Hurwitz recalls the denial and shock of having lost what was to him seven of the most precious things ever created. But these feelings quickly gave way to something more profound.

“Suddenly I realised, with these nanosculptures, that they had developed a story. Suddenly (they) had taken on a life of their own, a kind of narrative which was always lacking with this sculpture.

“So, a physical object went missing, and in it’s place it left a story.”