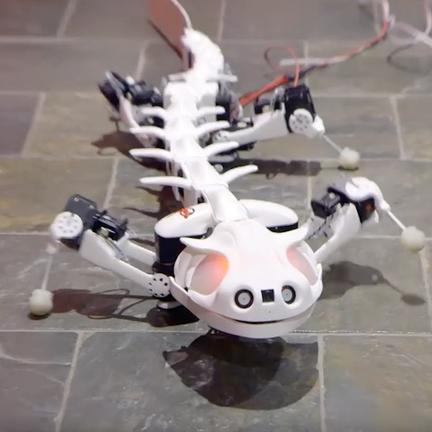 Nervous systems do a lot of driving on auto-pilot – it’s why chickens can run around with their heads chopped off. Bundles of nerves along the spine called “pattern generators” command rhythmic movement, like walking, without the brain having to consciously think about it.

This robot was designed to mimic the Pleurodeles waltl salamander, whose spinal cord has two auto-pilot settings. Electrically stimulated at low levels, the nerves kick-start the walking rhythm. Ramp the stimulation up a gear and the salamander starts swimming.

To build their robot, the team analysed X-ray videos of salamanders swimming and walking, tracking which limbs in the skeleton are necessary for both movements.

Then, they modelled from where along the robot’s spine the pattern generators have to send signals to produce both walking and swimming rhythms.

Developer Auke Ijspeert says studying the salamanders’ spine may teach us how animals first learned to walk on land.

“It’s a really key animal from an evolutionary point of view,” he said during a TED Talk.

“The modern salamander is very close to the first terrestrial vertebrate, so it’s almost a living fossil, which gives us access to our ancestor, the ancestor to all terrestrial tetrapods.”

His team is now running spin-off projects developing the Pleurobot for search and rescue missions. Fitted out with cameras, these robots could wade through a collapsed, partially flooded building to seek out trapped survivors and create a line of communication with them.

That’s after small tweaks to their appearance, Ijspeert adds – for now these alarming-looking robots would more likely give survivors a heart attack.