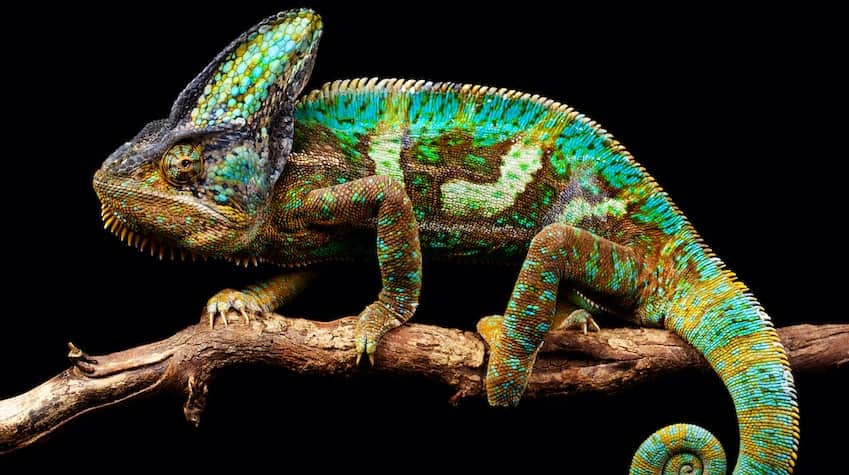 The skin of a chameleon can rapidly mimic its background, producing a powerful camouflage effect. Researchers are attempting to mimic this ability to create smart, wearable technology that can blend into its surrounds. Image credit: MarkBridger/Getty Images
More on:
future robots

Artificial camouflage may sound more like science fiction than science, but the possibility of donning a colour-changing material that blends chameleon-like into your surroundings has long been probed for its military implications. Now, researchers from Seoul National University, South Korea, have created an artificial ‘skin’ that can almost instantaneously mimic the colours around it.

The team modelled the skin’s behaviour on the real deal: chameleons, which are hypothesised to collect visual data through the retina, and then modulate their skin colour via motor neurons. Using colour sensors and feedback control systems, the authors fabricated an artificial skin that adopted a similar approach. They then applied it to a soft-bodied robot.

As the chameleon-bot scurried through a changing set of coloured backgrounds, the robot’s skin was able to sense the background colour and match it almost instantaneously.

The authors say their creation may be the first step towards wearable colour-changing technology that could protect military personnel and vehicles from attack. Such technology is the next logical step in a thought process that began in the 1800s, when British Colonel Hamilton Smith conducted experiments to examine which colour uniforms could fool sharpshooters.

The process of taking inspiration from evolutionary quirks found in nature is known as biomimicry or bio-inspiration.

“When we are working in a research group, the senior researchers as well as the established techniques of the group helps your research tremendously,” says co-author Sukjoon Hong. “And I think nature does the same to us – providing us smart ideas and optical solutions selected by nature itself.”