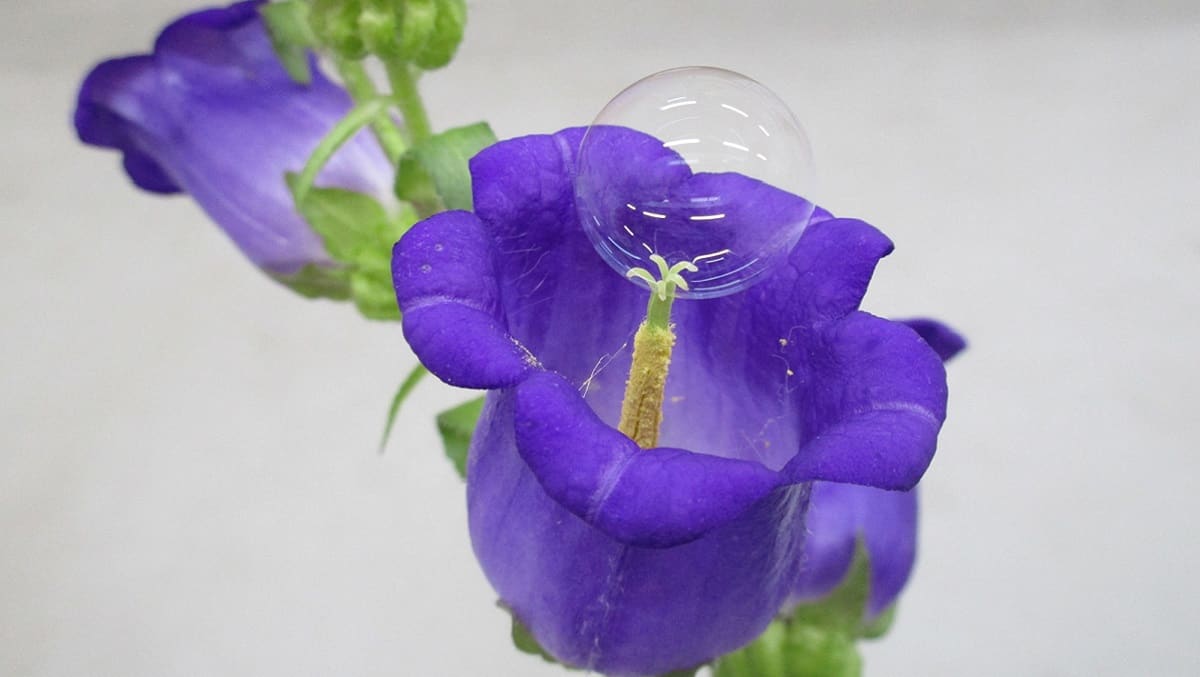 The answer to most things these days is an app or a drone, so it’s rare when one of these falls short of the mark, let alone when it’s replaced by something as simple as a bubble.

But that’s what happened in Nomi, Japan, when scientists used soap bubbles to help pollinate a pear orchard by delivering pollen grains to targeted flowers.

They acknowledge it’s a somewhat whimsical idea but suggest, in a paper in the journal iScience, that it may present a realistic low-tech complement to robotic pollination technology designed to supplement the work of vanishing bees.

“In comparison with other types of remote pollination, functional soap bubbles have innovative potentiality and unique properties, such as effective and convenient delivery of pollen grains to targeted flowers and high flexibility to avoid damaging them,” says senior author Eijiro Miyako, from the Japan Advanced Institute of Science and Technology.

In a previous study, Miyako and colleagues did use a toy drone to pollinate blossoming flowers, but even though it was only two centimetres long, it damaged the flowers as it bumped into them.

He came up with the new approach while blowing bubbles in the park with his son. The next stages were to confirm through optical microscopy that soap bubbles could, in fact, carry pollen grains, and then to work out the right choice of soap and soap concentration.

When Miyako and co-author Xi Yang were happy, they loaded the solution into a bubble gun and released pollen-loaded bubbles (about 2000 grains in each) into a pear orchard, hitting their targets and producing fruit.

Finally, they loaded an autonomous, GPS-controlled drone (OK, they do have a role) with functionalised soap bubbles and found they could hit targets – fake flowers in this case as real ones weren’t in bloom – with a 90% success rate when moving a two metres a second.

The technique still needs work – notably around greater precision and what to do about rain – but you have to admit it’s cool.

Drones are still making headlines of their own, however. In Brazil, one equipped with sensors, cameras and an insect storage unit was used to help disperse more than 200,000 sterile male mosquitoes across a region known as a hotbed of vectors for diseases like malaria, dengue and Zika.

The strategy helped limit fertility in male mosquitoes and reduce viable eggs laid by female mosquitoes in a 20-hectare trial area, according to a study in the journal Science Robotics.

It also offered more than a 20-fold reduction in total costs, compared to a ground-based approach used in China, the authors say.

In future work, the researchers hope to further slash the cost of their technology by chilling the mosquitoes and shipping them, abolishing the need for costly emergence and release centres in target areas.

The project was led by Jérémy Bouyer, from Université de Montpellier in France, and included researchers from Austria, the UK, Switzerland, Senegal, Brazil, Spain and Italy.