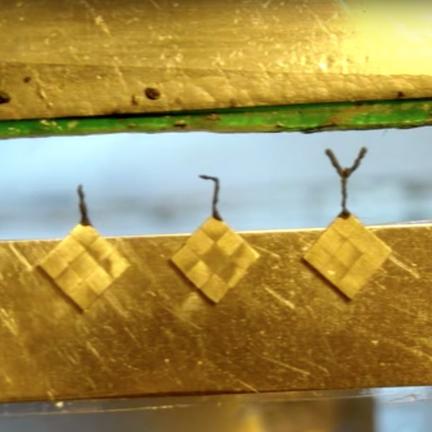 US research institute SRI International has been at work for some time developing construction micro-robots on a tiny scale that work as a co-operative swarm to make macro structures.

The bots are really just magnets controlled by magnetic fields generated by a printed circuit board substrate.

Simple, low-cost materials allow the cost-effective production of large numbers of micro-robots that can handle a wide variety of solid and liquid materials – including electronics, SRI says.

The underlying circuit boards determine the direction they take and their speed – and they can move fast – up to 35 centimetres per second – climbing in any orientation, even on flexing surfaces.

They are controlled to run parallel tasks like an army of ants. Each identical bot is distinguished by its “end-effectors” – the tools that perform the specific tasks designated for each individual bot.

“Our vision is to enable an assembly head containing thousands of micro-robots to manufacture high-quality macro-scale products while providing millimetre-scale structural control,” SRI says. “For example, some micro-robots will carry components – electronic as well as mechanical – some micro-robots will deposit liquids, and others will perform in situ quality analysis.

“Mounted to a mobile robotic base, a microfactory will be able to build parts of practically any size.”

The video below shows them in operation in what is, in effect, a microfactory.

But now SRI has developed a way to make the micro-robots more self-sufficient, by fabricating their own tools as required.

Each of the bots is identical, except for the tools, or “end-effectors”, that allow them to perform their designated tasks.

So rather than have to construct thousands of specialised micro-bots, SRI has come up with a way for the bots themselves to set up a tool-shop to make the specialised end-effectors used by other bots.

They can also form into different arrays, joining together several micro-robots in specific shapes depending on the task required. The first half of the video below shows they way the micro-bots are corralled in an “incubator” that forms several up into different arrays.

The second part of the video shows a micro-bot equipping other micro-bots with specialised end-effectors.

Ron Pelrine, chief scientist in the Robotics Program at SRI International, spoke to IEEE Spectrum about the project.

The microfactory tool shop works in much the same way as would a tool shop in a macro factory, he says.

Instead of having to many special-purpose robots to complete tasks that may change, you just buy standardised robots, and outfit them with special purpose-tools that you make on-site.

SRI is also working on a new way of controlling magnetic micro robots using magnetic levitation that would allow the bots to be positioned much more accurately – at a resolution of 200 nanometres.

Pelrine foresees other uses for the technology beyond manufacturing, with the micro-robots integrated with other robotic systems, “’living’ inside larger robots, monitoring them and performing maintenance and repairs”.