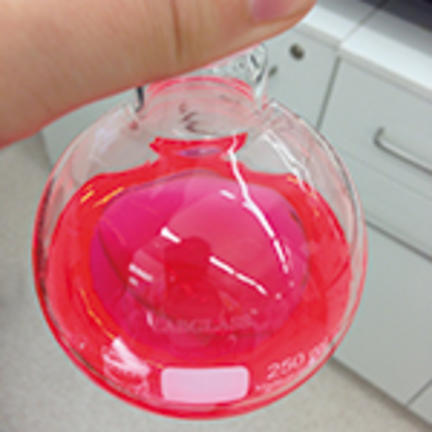 A plane’s livery is more than decoration or advertising – the thin layer of paint stops the plane corroding. But knowing where the paint is thinning, and where corrosion is starting to take hold, is no simple task.

So Vanessa Lussini, a chemistry PhD student at Queensland University of Technology, made a molecular sensor that lights up the sections of metal that need a touch-up – a big deal when you consider it can cost $100,000 to repaint a plane.

“Corrosion is like a cancer to metal,” Lussini says. When oxygen molecules latch on to the strong, light aluminium alloy most planes are built from they start eating away at the metal. Paint is an effective barrier, but it can chip or flake off and it also naturally degrades – accelerated by temperature and sunlight – so planes are regularly repainted. “Often only certain sections need to be painted because they are more exposed and degrade faster,” Lussini says.

This is where Lussini’s molecular sensor can help. It can be mixed in with paint to light up the sections or spots that need repainting.

The sensor molecule has two parts: one end plays the role of the glowing light bulb, and the other end is the switch that turns it on. The switch is a nitroxide, a man-made molecule with a rare property – it is a free radical that is relatively non-reactive.

“It’s happy to dance by itself,” Lussini says, “but when another free radical rocks up – like one produced by degrading paint – it grabs it.”

When the nitroxide partners up with an oxidative free radical, it activates the fluorophore – the lightbulb – at the other end of the sensor molecule. Under UV light, the activated fluorophore glows brightly, showing engineers where they should paint.

So far, Lussini has added her sensor molecules into plastic films to test how long they last out in the elements, with promising results. “You’d be surprised how quickly the plastic degrades in the Brisbane sun,” she says. “The sensors stayed strong though.”

The next step is to mix the molecules with paint. “The lucky thing is you can use a very low concentration,” she says. “I’m talking about less than 0.1%. If we actually put too much in it seems to work less well, because of the free nitroxides.” She explains that if too many nitroxide molecules are added they react with each other rather than catching the free radicals produced by the degrading paint.

The paint isn’t limited to planes, Lussini says. It can be used on bridges or ships – any structure that needs paint to protect it from corrosion. “It has so many applications that affect just about everyone,” she says.