Home ■ Technology ■ How to preserve data to last 13.8 billion years 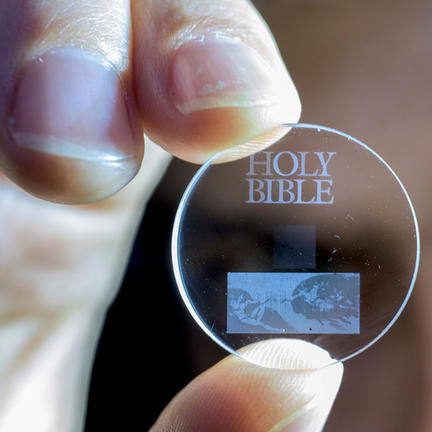 Humanity is unlikely to last another 13.8 billion years, but our legacy might, thanks to a new data format developed by University of Southampton scientists.

The technology’s performance will be unveiled at the International Society for Optical Engineering Conference in San Francisco today.

Here’s how it works.

The technology uses a femtosecond laser – one whose pulse of light lasts a femtoscond, or one millionth of one billionth, of a second.

It shoots concentrated bursts at a glass disc, engraving encoded digital data into three layers of nanostructured dots, each separated by five micrometres – a 20th the width of a human hair.

These etched “nanogratings” encode data as variations in five “dimensions” – their size, orientation and three-dimensional position in the glass, which lets the disc pack loads of information into a tiny space.

When light is then passed through the glass, the nanogratings change the polarisation of the light. This allows the information to be decoded using an optical microscope and a polariser – similar to the lenses in Polaroid sunglasses.

Books, CDs, even the magnetic plate in your hard drive, all carry information on materials that can be scratched or damaged over time by heat or humidity.

But encased inside these stable glass discs, data – 360 terabytes of it per disc – could be safely archived, in theory, forever. According to the scientists' calculations,  13.8 billion years – the age of the Universe – even at a toasty 190 °C. The discs are stable up to 1,000 °C, but the scientsists say that at room temperature, they would last forever.

The 5-D technology was first demonstrated in 2013, encoding a humble 300-kilobit document. Since then scientists have tweaked the technique and used it to archive big documents, such as the Declaration of Human Rights, Newton’s Opticks, the Magna Carta and the Kings James Bible.

The team are planning to collaborate with industry partners to commercialise the technology and are aiming high to keepsake their discs.

“It is thrilling to think that we have created the technology to preserve documents and information and store it in space for future generations,” said the method’s developer Peter Kazansky.

“This technology can secure the last evidence of our civilisation: all we’ve learnt will not be forgotten.”