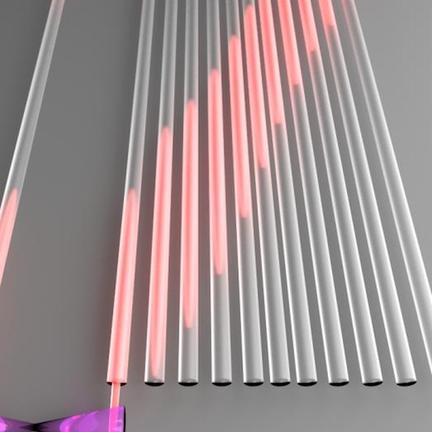 Communication is key – it’s as true in human relationships, as in the heart of a quantum computer. A team of Australian scientists has devised a way for different elements of a quantum computer to talk to one another using light to route quantum information without garbling the message.

It’s the latest critical component towards building a large-scale quantum computer which would revolutionise modern technology – and perhaps enable rapid solutions to problems conventional computers would need 1,000 years to solve.

Although we’ve known about the promise of quantum computers since the 1970s, actually building one has become one of the grandest quests in modern science. It’s been a global effort with thousands of physicists and engineers working to reimagine the various computing elements to work with quantum information.

The latest advance is a major step towards realizing a quantum version of the data bus – the vital system that shuttles information around a computer, allowing the processor to communicate with the memory and so on.

But what is straightforward for regular computers has been nigh impossible to achieve for quantum systems.

Whereas conventional computers use an assembly of simple electronic switches, or “bits” to code information as 0s and 1s. Quantum computing relies on quantum bits, or "qubits", that can be 0, 1 or – strangely – both, in a state known as a superposition (see Quantum computing – yes, no and maybe). This allows quantum computers to attempt multiple solutions at once, making some computations, such as codebreaking (see Will this quantum computer take down internet banking? ).

It also makes communication within a quantum computer much more difficult. Quantum states are incredibly delicate – any bump in the road could cause them to flip to either a 0 or 1 and lose the superposition.

Now, after a decade of global research, and many theoretical schemes, researchers at the Royal Melbourne Institute of Technology (RMIT), have devised a way to shuttle qubits around with perfect integrity.

To route this information across the device, the team led by Alberto Peruzzo cleverly deployed an array of waveguides lined up in parallel.

This allowed the team to exploit the weird phenomena of quantum tunneling – an effect which allows quantum particles to walk through walls or, in this case, hop across a chasm.

In this way, the photons hop from waveguide to waveguide like a car changing lanes on the highway.

Crucially, the photons could be routed without disturbing their quantum superposition.

Peruzzo says the new work will induce fundamental changes in the way we design the infrastructure of the next-generation quantum information processing devices.

"It's a breakthrough that has the potential to open up quantum computing in the near future,” he says.