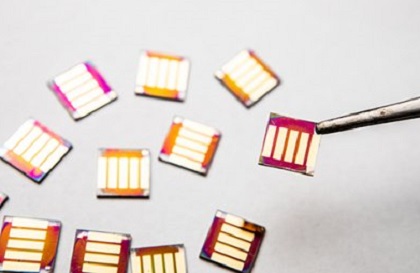 Credit: The University of Queensland

Australian researchers have set a new world record for the conversion of solar energy to electricity using quantum dots, which pass electrons between one another and generate electrical current when exposed to solar energy in a solar cell device.

After independent testing, the National Renewable Energy Laboratory (NREL) in the US found that a team from the University of Queensland led by Lianzhou Wang had achieved 16.6% efficiency; the previous record in quantum dot solar cell category was 13.4%.

The development, which is described in a paper in the journal Nature Energy, represents a significant step towards making the technology commercially-viable and supporting global renewable energy targets, the researchers say.

Unlike conventional solar technologies, which use rigid, expensive materials, the new class of quantum dots are flexible and printable, notes Wang. “This opens up a huge range of potential applications, including the possibility to use it as a transparent skin to power cars, planes, homes and wearable technology.”

The secret to success was developing a unique surface engineering strategy. The surface of quantum dots tends to be rough and unstable – making them less efficient at converting solar into electrical current.

“The near 25% improvement in efficiency we have achieved over the previous world record is important.

“It is effectively the difference between quantum dot solar cell technology being an exciting prospect and being commercially viable.”