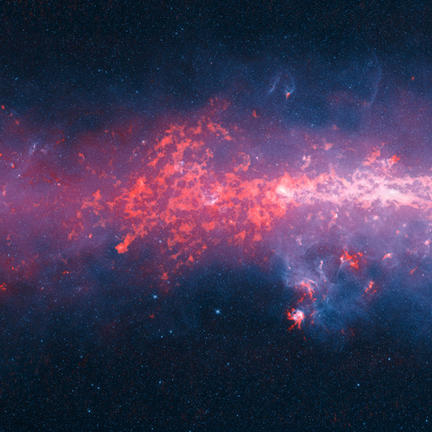 Three of Saturn's moons – Tethys, Enceladus and Mimas – are captured in this group photo from NASA's Cassini spacecraft.

This view looks toward the sunlit side of the rings from about 0.4 degrees above the ring plane. The image was taken in visible light with the Cassini spacecraft narrow-angle camera at a distance of approximately 1.35 million kilometres from Enceladus.

NASA satellites provided data on Tropical Cyclone Winston before and after it made its destructive and deadly landfall in eastern Fiji. The GPM, Suomi NPP and Aqua satellites provided forecasters with data that showed rainfall, strength and extent of the storm.

Tropical Cyclone Winston made landfall on February 20 in Vitu Levi, eastern Fiji, as a Category 5 hurricane on the Saffir-Simpson Hurricane Wind Scale. Winston was the first cyclone of that strength to make landfall in Fiji in recorded history. The death toll in Fiji from the cyclone stands at 42 and the number of fatalities continues to rise.

Fuelling the Trace Gas Orbiter for the long trip to Mars

Any long journey requires an ample supply of fuel and fuelling of the Trace Gas Orbiter, which is heading to Mars, began on February 21. This spacecraft has one fuel tank and one oxidiser tank, each with a capacity of 1,207 litres. When fuelling is complete, the tanks will contain about 1.5 tonnes of MON (mixed oxides of nitrogen) and 1 tonne of MMH (monomethylhydrazine).

The propellant is needed for the main engine and the 10 thrusters (plus 10 backup thrusters) that are used for fine targeting and critical manoeuvres.

Since fuelling is a hazardous exercise, only essential staff – wearing protective suits – are allowed in the fuelling area. While this activity is under way, the fire brigade, doctor, security and safety officers are on hand.

The launch window for the Trace Gas Orbiter and Schiaparelli is open March 14-25 2016.

After a seven-month journey through space, Schiaparelli will separate from the orbiter on October 16 and head towards the planet’s surface, where it will land three days later, on Meridiani Planum.

Waterfall turns into a firefall at Yosemite

Near the end of February, if the conditions are right and the water is flowing in Yosemite National Park, the Horsetail Fall is an impressive sight ablaze with reds and oranges like fire falling down the cliffs.

The phenomenon is caused by the position of the Sun during these last few weeks of February. The light at sunset hits the waterfall in just the right way to set the whole cataract alight, creating the illusion of tumbling rivers of lava.

And thanks to the heavy snow fall and rain in the high Sierra Mountains early this year and an El Nino season, all that melting snow is making its way to El Capitan and cascading down the falls into the valley below, making this year’s firefall a stunning photographers delight.

A spectacular new view of the Milky Way

The sharpest map yet of the Milky Way was released this week to mark the completion of the APEX Telescope Large Area Survey of the Galaxy (ATLASGAL). The APEX telescope in Chile has mapped the full area of the Galactic Plane visible from the southern hemisphere for the first time at submillimetre wavelengths – between infrared light and radio waves – and in finer detail than recent space-based surveys.

The APEX data, at a wavelength of 0.87 millimetres, shows up in red and the background blue image was imaged at shorter infrared wavelengths by the NASA Spitzer Space Telescope as part of the GLIMPSE survey. The fainter extended red structures come from complementary observations made by the European Space Agency's Planck satellite.

The video takes a close scrolling look at the large, new image.