Home ■ Space ■ The wild ride of a ‘hot Jupiter’ 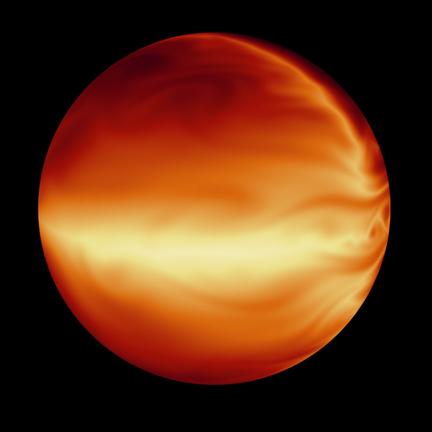 A massive exoplanet with a wildly eccentric orbit more like that of a comet, is giving NASA scientists new insights into a class of planet known as “hot Jupiters”.

These are gas giants like Jupiter but orbiting much closer to their stars than their namesake does to the Sun.

A surprisingly large number of the 2,000 confirmed planets outside our solar system belong to this class – so much so that Jupiter itself appears to be the odd man out.

“We thought our solar system was normal, but that's not so much the case,” said astronomer Greg Laughlin of the University of California, Santa Cruz, co-author of a new study from NASA's Spitzer Space Telescope that investigates hot Jupiter formations.

But scientists still know very little about the phenomenon, least of all how the huge planets form and why they orbit their stars so closely.

That may change thanks to the study, using the Spitzer telescope, of a hot Jupiter known as HD 80606b, situated 190 light-years from Earth.

Its wild orbit takes it close to its star and then far away over a 111-day period and scientists believe it is in the process of migrating from a more distant orbit to a much tighter one.

“As the planet gets closer to the star, it feels a burst of starlight, or radiation. The atmosphere becomes a cauldron of chemical reactions, and the winds ramp up far beyond hurricane force,” says Laughlin, a co-author on the Spitzer study, which is accepted for publication in The Astrophysical Journal Letters.

“Hot Jupiters” are thought to form when gas giants in distant orbits are driven into closer ones by the gravitational influences of nearby stars or planets.

Over hundreds of millions of years they are thought to gradually settle down from wild, eccentric orbits into tight, circular ones.

“This planet is thought to be caught in the act of migrating inward,” said Julien de Wit of the Massachusetts Institute of Technology, Cambridge, lead author of the new study.

“By studying it, we are able to test theories of hot Jupiter formation.”

The study considers how long HD 80606b is taking to migrate into a circular orbit.

Scientists are looking at how “squishy” the planet is when it closely approaches its star, and the gravity squeezes it. The more pliable, it is, the better it dissipates this gravitational energy as heat and the faster it will transition to a circular orbit, a process known as circularisation.

“If you take a Nerf ball and squeeze it a bunch of times really fast, you'll see that it heats up,” says Laughlin. “That's because the Nerf ball is good at transferring that mechanical energy into heat. It's squishy as a result.”

The Spitzer results show that HD 80606b is not is not squishy, suggesting it is not circularising its orbit as fast as expected, and may take another 10 billion years or more to complete.

“We are starting to learn how long it may take for hot Jupiter migration to occur,” said de Wit. “Our theories said it shouldn't take that long because we don't see migrating hot Jupiters very often.”

The new study also discovers that the rotation rate of HD 80606b at 90 hours is much slower than predicted.