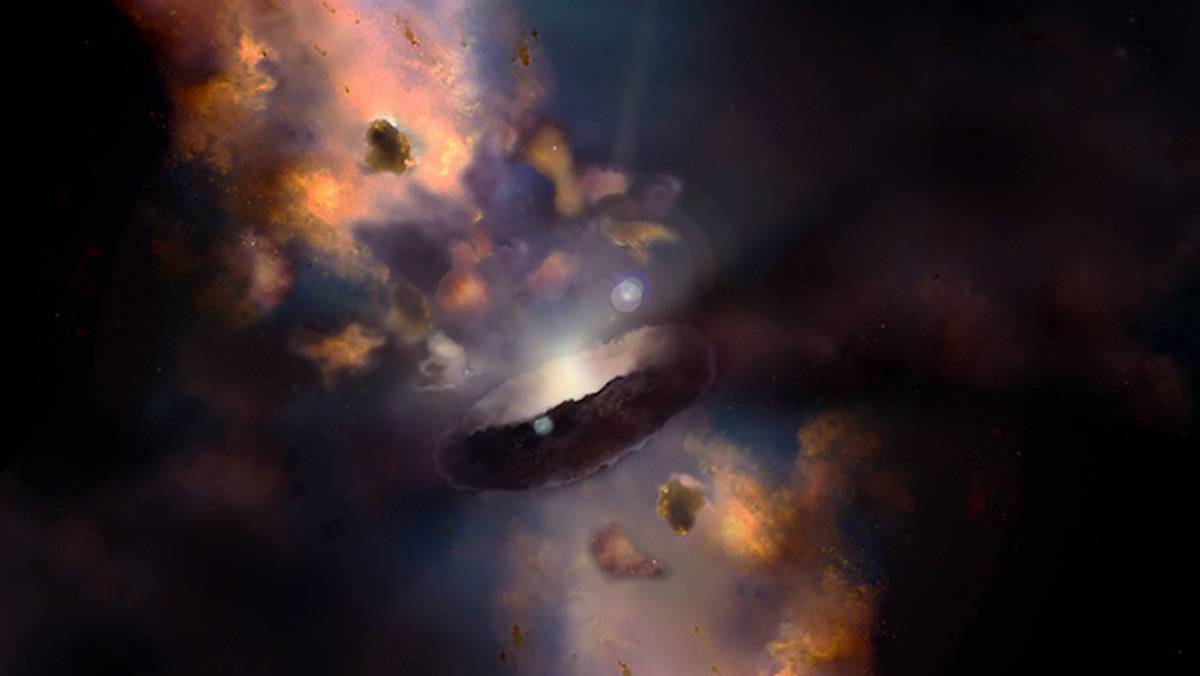 In the pantheon of astronomical objects, black holes are among the most amazing.

Not only do they swallow large amounts of matter into a void beyond ordinary comprehension, but they are messy eaters, ejecting the dregs of their meals in fierce jets that make them among the most energetic objects in the Universe.

All of this drama makes them enormously appealing to those looking for something ever bigger or ever more energetic than anything ever seen before.

Last week, for example, a team led by Christopher Onken from the Australian National University reported in the Monthly Notices of the Royal Astronomical Society that it had found a way to weigh a black hole that formed when the Universe was only 10% its present age –  and discovered it was 34 billion times the mass of the Sun and was swallowing mass at the rate of one Sun every day.

“It’s the biggest black hole that’s been weighed in this early period of the Universe,” Onken says, noting that it is nearly 8000 times larger than the black hole at the centre of our own galaxy.

Others have been studying smaller black holes formed from the cores of dying stars that collapse under their own gravity until nothing is left but a smaller, “stellar mass” black hole.

And while these are mere pipsqueaks compared to supermassive “galactic” black holes such as the one studied by Onken’s team, they are no less fascinating.

In a December 2019 paper published in The Astrophysical Journal, a team led by researchers at the University of Tokyo looked in detail at the process by which such collapses operate.

Among other things, it found that only stars of certain sizes are capable of producing black holes when they die. In fact, it found that stars between 130 and 300 times the mass of the Sun can’t do so, while those above and below that size can. (The midsize ones blow themselves apart instead of collapsing.)

Because such black holes are smaller than the stars that formed them, the result, they say, is a “mass gap” that precludes the formation of stellar black holes in the range between 52 and 150 solar masses.

That much we know. But there’s a lot more waiting to be discovered.

“There are a lot of important questions,” says Dan Marrone of the University of Arizona’s Steward Observatory on a mountaintop near Tucson, Arizona. For example, he says, nobody is sure how supermassive black holes are “seeded.”

“Do they come from the deaths of the first stars and grow into billion-solar-mass monsters?” he asks. “Can they really do that fast enough to explain [what we see in the early Universe]?”

These black holes could have grown in two ways, adds Paul Mason, an astrophysicist at New Mexico State University: incremental accretion of gas and dust or the merger of smaller black holes.

But none of this answers Onken’s question about how galactic black holes start.

It appears, he says, that they must either have started off with substantial mass – perhaps 10,000 or 100,000 times the mass of the Sun (something that is hard to fathom if they started out as stellar black holes) or been formed by some other mechanism, as yet not understood.

“Maybe it’s a clue that the cosmology of the early Universe had a mechanism to produce black holes directly from quantum fluctuations just after the Big Bang,” he says.

If so, it could help us understand how the Universe evolved into what we see today.

Also important is learning how the growth of these holes affects their host galaxies. “We know that it does,” Marrone says, “but the details of how the enormous energy they release connects to the gas in their galaxies, potentially shutting off star formation, is a big open issue.”

For the smaller black holes produced from the collapses of individual stars there are also many unresolved questions.

For example, Onken notes that these black holes are extremely good laboratories to probe the limits of Einstein’s theory of gravity. “Do we see any signs that Einstein’s theory from over 100 years ago needs any modification in regimes of extreme gravity such as black holes?” he asks.

All of this is good news for those who find black holes to be fascinating, in and of themselves. As long as these questions are unanswered, astronomers will continue to seek them out, and the parade of bigger, brighter, and more dramatic discoveries is unlikely to end soon.

Originally published by Cosmos as Why we love black holes