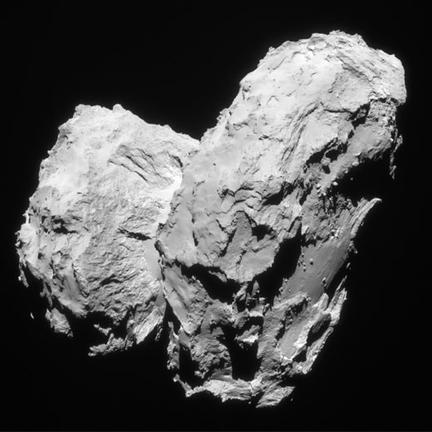 The decade-long, six-billion-kilometre journey was the equivalent of throwing a dart from Perth and hitting a bullseye in Sydney. But it was not only a technological tour de force; the tiny comet has been interrogated to answer some profound questions about our Solar System.

Last November Rosetta dropped the Philae probe on to the comet’s surface to give us 60 hours up close and personal with the “dirty snowball” before running out of power. And on 13 August this year, Rosetta gave us a ring-side view as 67P made its closest pass to the Sun, spewing spectacular plumes of dust and gas.

So what have we learned so far? And what further mysteries could Rosetta still reveal as it shadows the comet while it arcs back towards the outer Solar System?

The so-called music of the spheres believed by the ancients to arise from the movement of the planets, may actually come from comets

One of the most fundamental questions the mission set out to answer was: did comets bring the ingredients for life, water and organic (carbon-based), materials to Earth?

In the journal Science in July this year, two separate teams reported that Philae sniffed out organic material, including four compounds never before seen on a comet. While the teams didn’t identify amino acids, they did detect several possible amino acid precursors. So it’s certainly possible comets such as 67P shuttled amino acids, sugars and other simple organic compounds to an early Earth.

What about water? Comets are mountain-sized icebergs in space, so it was reasonable to assume that comets crash landing on Earth could have introduced water and filled our seas. One of the mission’s great surprises is that this assumption appears to be wrong.

Earth’s water has a specific ratio of normal water to “heavy” water (in heavy water one of the hydrogen atoms is replaced with a slightly heavier deuterium atom). But the water on 67P has three times as much heavy water as the Earth. So this type of comet couldn’t have been the source of Earth’s water.

A subtle, but no less surprising, revelation was published in Science in April. Researchers analysing Philae’s magnetometer data reported that the comet seemed to lack a magnetic field.

It was thought that in the early days of the Solar System, 4.6 billion years ago, magnetic fields helped rubble to clump together to become planets. Philae’s bouncy landing allowed it to measure magnetic fields across different sites and heights above the comet. The only magnetic field it detected came from the Sun.

Philae’s on-board magnetometer could only measure the magnetic field from a metre above the surface so we don’t know if its dust grains are individually magnetic. But the comet’s lack of overall magnetic fields suggests that, if magnetism did play a role in the early Solar System, it was only to help clump dust particles and pebbles smaller than a metre in size.

A comet’s most distinctive feature – and their biggest mystery – are their two tails. Everyone knows that comets leave a spectacular trail of dust particles in their wake as they travel through space. Like all comets, 67P also has a second, narrower tail – a plume of gas blown off the comet by the powerful solar wind. This second tail always points directly away from the Sun.

While previous missions have flown near (and through!) comet tails, we have never before had the opportunity to see how the tails form and grow. Intriguingly, 67P’s surface appears to be covered with sinkholes hundreds of metres wide – perhaps the source of the tails’ material. Scientists think that pockets of icy matter sublimated (changed directly from a solid to a gas), escaping from beneath the comet’s dusty surface and leaving a thin dust “roof” that eventually collapses to reveal the sinkhole.

Rosetta also discovered that the so-called 'music of the spheres' – a phrase the ancients used to describe the harmonious movement of the planets – may actually come from comets. It appears that 67P emits a “song” – vibrations that were picked up by Rosetta’s magnetometer. Mission scientists think these vibrations come from gases being whisked off the comet surface by the solar wind, but the precise mechanism remains unknown. Regardless, the end result is a striking and entirely alien sound.

In the past couple of weeks the long-awaited closest passage, or perihelion, of the comet passing the Sun saw dramatic plumes of ice and dust launched into space.

During perihelion 67P lost around 300 kilograms of water (about two bathtubs full) as vapour per second. A tonne of dust was also ripped from the comet’s surface each second, posing a danger for orbiting Rosetta. The dust confused the star-tracking sensors used to pinpoint Rosetta’s position, forcing the spacecraft to retreat until the conditions became less stormy.

While there was hope for the Philae lander after it briefly woke from hibernation in June, the maelstrom on the comet’s surface has probably damaged it further. Chances of any further communication are unlikely.

As the comet begins its long journey back into the darker regions of the Solar System, the Rosetta team will face a critical decision. Rosetta runs out of fuel in September next year, and the ESA had planned to allow it to end its days drifting in space as the Voyager spacecraft has done. Rosetta carries a 7.5-centimetre-wide nickel disk micro-etched with 1,000 languages, symbolically linking the spacecraft to its namesake, the Rosetta stone.

But the ESA is now considering other alternatives. The spacecraft might be slammed into the comet to throw up material to be studied with telescopes. Or Rosetta might follow Philae’s lead and try to land on the surface, bringing a UV camera and sensitive instruments for an unrivalled close-up view.

Regardless of the ESA’s decision, Rosetta will be remembered as one of the most astounding feats of space exploration ever taken. It’s already changed our understanding of our Solar System and the Earth’s youth.

Not bad for a year’s work.

Also from Cosmos Magazine:
Rosetta: "At the limit of what mankind can do"