Home ■ Space ■ What made the painted swirls on the Moon’s surface? 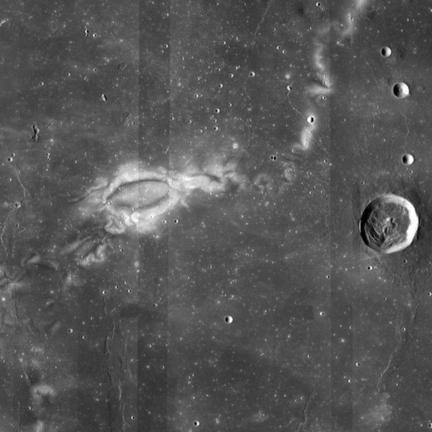 NASA scientists have come up with a new model to explain the mysterious swirls that appear to be painted on the Moon’s surface.

These “lunar swirls” can be tens of kilometres across and appear where ancient bits of magnetic field are embedded in the lunar crust – although not every time.

The other distinctive feature of them is that the bright areas of the swirls appear to be less weathered than their surroundings.

But beyond that scientists have been able to learn little about the features.

“They are unique,” says John Keller of NASA’s Goddard Space Flight Centre. “We’ve only seen these features on the Moon, and their origin has remained a mystery since their discovery.”

Until now there have been three main theories about how the swirls formed.

The first suggests that both the swirls and the magnetic fields both formed from plumes of material ejected by comet impacts.

The second, argues that fine dust particles thrown up by micrometeorite impacts could have been sorted by an existing magnetic field forming light and dark patterns with different compositions and magnetism.

The third theory says that, since electrons and ions in the solar wind are electrically charged, they respond to magnetic forces and that the magnetic field on the Moon could shield the surface from weathering by the solar wind.

The new research looked closely at the third of these theories, relying on new observations by the Lunar Reconnaissance Orbiter (LRO). But scientists found some problems when it came to modelling the theory.

“The problem with the magnetic shield idea is that the embedded magnetic fields on the Moon are very weak – about 300 times weaker than Earth’s magnetic field,” said Bill Farrell of NASA Goddard.

“It’s hard to see how they would have the strength to deflect the solar wind ions.”

But what the new models did show was that the magnetic field could create a strong electric field when the solar wind attempts to flow through.

And this powerful electric potential could deflect and slow particles in the solar wind, reducing weathering on the surface of the Moon, leaving brighter regions where it was protected.

But the research has not ruled out the other two theories.

Wikipedia set to travel to the Moon

Wikipedia communities called on to help decide what to include

A team of scientists and engineers in Berlin, working on sending a customised rover to the Moon, are planning to send a version of Wikipedia with the vehicle to make the online dictionary’s 15th anniversary.

It is one of five image-gathering rover projects competing to land on the Moon by 2017 for the Google Lunar XPRIZE challenge.

Wikimedia Deutschland has been offered space on a data disc to be carried by the Part-Time Scientists Team. But there is a catch.

With a capacity of just 20 gigabytes of space, all the Wikipedia communities have been called upon to agree on which content should be included by 24 June.

“Even if only a snapshot of Wikipedia can be brought to the Moon, its content will equal a genuine snapshot of the sum of all human knowledge,” the group says.

“This is an anniversary gift to all Wikipedia communities all over the world.”

You can find out more about the project here.