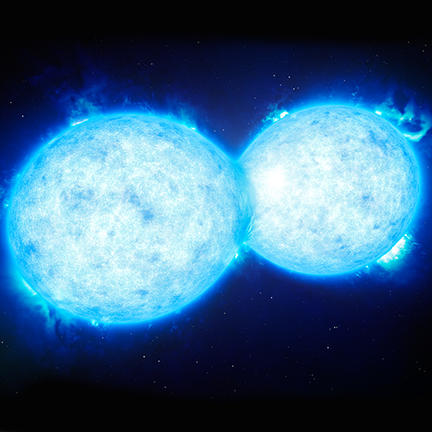 Spotted: two massive stars, caught in the middle of a sizzling kiss. What sounds like paparazzi fodder is a rare discovery made by an international team of astronomers – two huge, hot stars orbiting each other so closely they’re touching. The double star system, described in The Astrophysical Journal in October, provides a glimpse into their brief but fiery contact. And like many tabloid stars, these celestial bodies are headed for cataclysmic destruction.

The lifecycle of solo stars is usually straightforward: born in vast gassy regions of space, they eventually burn through all their hydrogen and helium fuel before exploding as supernovae.

By means of gravity, some stars born in close quarters can drag each other into a spinning dance. How this affects the paired stars’ life cycle has not been well understood. It’s rare for astronomers to catch stars orbiting so close they are touching. While they might spend billions of years circling each other, the contact stage only lasts a few million years – the blink of a flashbulb in cosmological timescales – before the stars merge or explode.

Two years ago, Leonardo Almeida from the University of São Paulo, lead author of the new study, decided to look for binary stars caught in embrace. While at Johns Hopkins University in the US, he trawled through data collected by the European Southern Observatory’s Very Large Telescope in Chile. He focused his search on the Tarantula Nebula, a star nursery nestled in the Large Magellanic Cloud, 160,000 light-years from Earth. One double star system there, called VFTS352, stood out.

For stars that big but so near each other … they must have formed a bridge where their fuel can mingle.

The two stars were roughly the same size and were huge – their combined mass was around 57 times that of the Sun. Only three other high-mass binary systems had been found before VFTS352. The next biggest, V382, found in the Milky Way, has a combined weight of around 48 solar masses.

Based on the binary system’s fast orbit – the stars hurled around each other once a day – Almeida calculated the centres of the stars to be only 12 million kilometres apart. For stars that big but so near each other, Almeida says, they must have formed a bridge where their fuel can mingle. He thinks around 30% of their total volume is shared between the stars.

This internal mixing, Almeida says, also explains the extra heat pouring off them and could extend the stars’ life. A single star, on its own, will use up fuel in its core only – about 10% of its volume – before exploding into a supernova. But when two stars touch, their fuel reserves are churned all the way from their core to surface, making more fuel available to burn hotter for longer.

But the bad news is that VFTS352 won’t live happily ever after. The researchers think this binary system’s end could come in one of two ways: either the stars will merge to become one giant star, which will eventually explode, or they will separately explode into supernovae and live out their twilight years orbiting each other as black holes.

We won’t be around to see the final chapter though, Almeida says. Should the stars merge, he says, it will probably happen in around 600,000 years. But should they take the binary black hole route, the stars will have enough juice to burn for another three million years.

If the stars do become separate supernovae, Ashley Ruiter, an astronomer at the Australian National University, thinks their days as a couple may end. When the first star explodes it will blow off most of its mass, becoming much lighter than its companion. “Then when the second explodes, the stars could be kicked out of their orbit,” she says.

So there’s a chance they’ll end up as two lonesome black holes, drifting away from each other through the Universe.