A rare pair of stars whirling round each other, but sporting their own planets, has been spotted by US astronomers.

The work, which has been accepted for publication in The Astrophysical Letters, represents the closest binary star system in which both stars host planets.

It’s also the first exoplanet detection made based solely on data from the Planet Finder Spectrograph which is mounted on the Magellan Clay Telescopes at the Las Campanas Observatory.

The instrument takes observations over years, so seeks large planets with long-duration orbits or orbits that are very elliptical rather than circular.

The twin stars studied by the group, led by Carnegie Institute for Sciece astronomer Johanna Teske, are called HD 133131A and HD 133131B.

The two stars are separated by roughly 350 astronomical units (or AU – where one AU is the distance between the Earth and the sun). 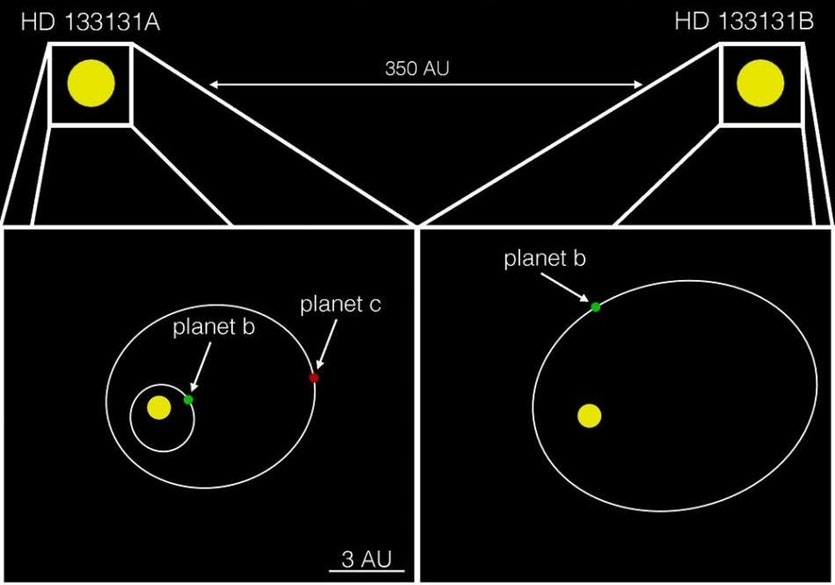 The system is even more unusual because both stars are “metal poor,” meaning that most of their mass is hydrogen and helium, not heavier elements.

Most stars that host giant planets are “metal rich.” Only six other metal-poor binary star systems with exoplanets have ever been found, making this discovery especially intriguing.

Adding to the intrigue, Teske used very precise analysis to reveal that the stars are not actually identical “twins” as previously thought, but have slightly different chemical compositions – so they’re more like the stellar equivalent of fraternal twins.

This could indicate that one star swallowed some baby planets early in its life, changing its composition slightly.