Home ■ Space ■ Tracking the violence in the Sun 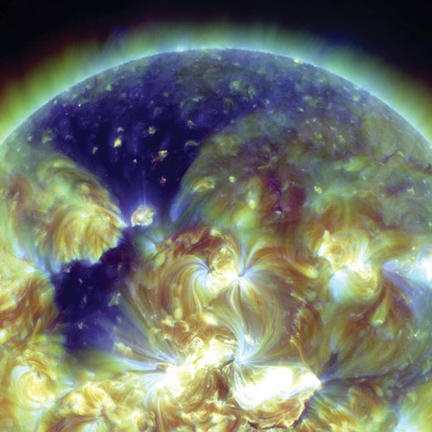 The Sun’s outermost aura, the corona, is a roiling mass of super-hot plasma, regularly flinging vast spitballs of superheated gas into space – sometimes towards our planet. On January 7, 2014, the Earth sat in the path of a potentially devastating trillion-kilogram blast.

A direct hit could have fried satellites, knocked out power grids, wreaked havoc with radio communications and zapped airborne travellers with radiation. But luck was on our side. The explosion swerved towards Mars, dealing Earth a glancing blow.

Did something in space deflect the blast or did it shoot crookedly from the Sun? The latter, reported Christian Moestl from the Austrian Academy of Sciences and colleagues in Nature Communications in May. Retracing the coronal mass ejection’s course, they showed our last-minute reprieve was courtesy of a lucky twist in the Sun’s magnetic field, which channelled the blast in the direction of Mars.

The discovery is a promising step toward reliable space weather forecasts, says RMIT physicist and space weather scientist Brett Carter. “Studies like these are extremely valuable because they merge observations with modelling. Throwing all this together we should have relatively accurate coronal mass ejection predictions,” he says.

We’re constantly bombarded by gas flying off the Sun – such as the constant stream of plasma called the solar wind – and Earth’s magnetic field provides a shield for most of the particles that come our way.

But sometimes our magnetic field shield isn’t quite strong enough. Every 11 years or so, the Sun experiences a period called the solar maximum when activities such as coronal mass ejections become more frequent. When the Sun burps a titanic blast of radiation and hot gas into the Solar System at more than a million kilometres an hour, part of the Sun’s magnetic field is dragged along for the ride. If the Earth happens to be in its path, this distorted solar magnetic field can cause power grids to surge, leading to blackouts that could take months to fix. “The magnetic field that’s dragged along with the coronal mass ejection ultimately governs how much of an issue it’s going to be for us,” Carter says.

So to see if he could forecast a coronal mass ejection’s path, Moestl took measurements from the Solar and Heliospheric Observatory and STEREO-A and STEREO-B craft, all of which orbit the Sun, of the first few hours of the January 7, 2014 event. “At the time they provided a 360-degree view of the Sun,” he says. “There was definitely an element of luck!”

Based on these measurements, he modelled where he expected the coronal mass ejection to hit. He then compared his projections with actual data captured by instruments on other spacecraft scattered around the inner Solar System, including the Wind spacecraft, which sits between the Sun and Earth, and the Curiosity rover on Mars.

Moestl’s predictions matched. Not only could he plot the shape of the coronal mass ejection and calculate its speed or arrival time to any given planet, he showed the burst came out from the Sun at an angle – rather than being deflected in space after it left the Sun. The only way this could happen, Moestl says, is if the Sun’s magnetic field channelled it: “It’s been known before that the magnetic field had some influence on coronal mass ejections but this was the first time we’ve showed it can bend them to this massive extent.”

And while astronomers can’t directly measure the Sun’s magnetic field, “the corona gives a good indicator” of its current shape, Moestl says – information that could be used to estimate the mass ejection’s path.

He acknowledges that his way of forecasting the path of a coronal mass ejection is subject to error, but new spacecraft being launched should help make predictions more accurate. The Deep Space Climate Observatory (DSCOVR) craft is already on its way to its final destination between the Earth and Sun where it will act as an early warning system of mass ejection events. Moestl says the European Space Agency’s upcoming Solar Orbiter mission will at times be able to peer down on to the space between the Sun and Earth to observe how coronal mass ejections travel – a little like how weather satellites can track cyclones.

Even small space weather events can affect us on Earth. Electricity grid operators constantly check to see how much power is being used by their customers and adjust their output to match it. But relatively minor storms can alter the electricity flow in the grids, Carter says, so it can look like demand has soared or plummeted. This prompts stations to barter over electricity prices with neighbouring power networks.

“And when power prices increase, who do you think ends up copping that bill at the end of the day?” Carter laughs. “I actually envision a day where the weather forecast on the news is given right next to the space weather forecast.”