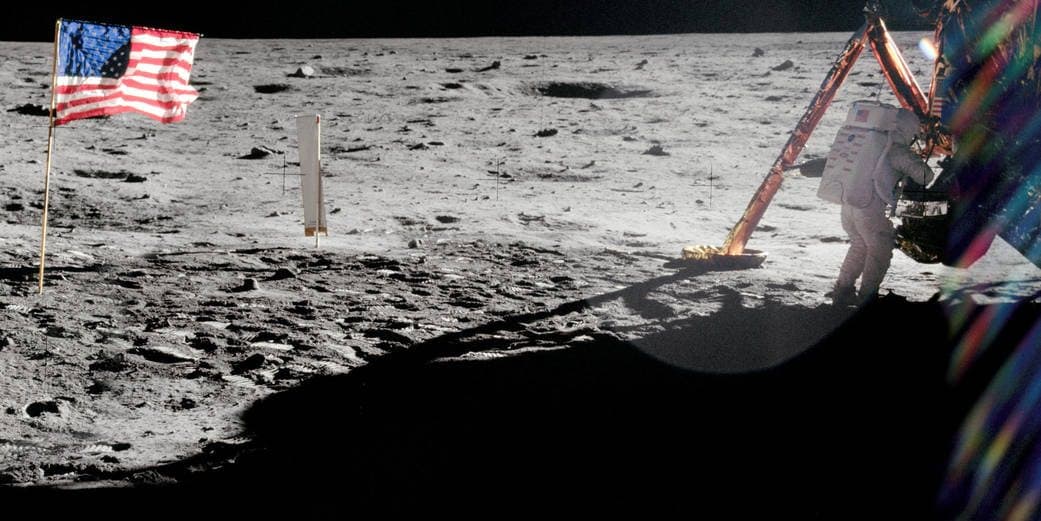 In July 2017 famed auction house Sotheby’s auctioned a unique piece of space history. The prices were expected to reach well over $4 million, but ultimately the gavel fell at “just” $1.8 million.

NASA was none too pleased about the sale. But what this object is, and how it came to be on sale, is an incredible story.

Everyone knows the story – 21 July 1969, Neil Armstrong became the first person to set foot on the moon’s surface. It heralded a new age, humanity had finally thrown off the shackles of Earth and become explorers of other worlds.

Not long after descending from the lunar lander and saying the immortal words, Armstrong and Buzz Aldrin got to work. Armstrong pulled out a fabric zip-up bag, and placed moon rocks and soil samples inside for transport back to Earth.

It was owned by lawyer and self-confessed space nerd Nancy Carlson who bought it on an online auction in 2015 for just $995. However, NASA insists that she had no right to sell it as she should never have owned it in the first place.

A tale of theft, legal action and a lucky purchase

Understandably, items from Apollo 11 are generally treated with care by NASA, and samples of lunar dust especially so. But this bag’s wild ride began many years ago when it was lent to a Kansas space museum called the Cosmosphere. After the director of the museum resigned in 2002, it was found that a number of artefacts were missing from the museum’s collection. The bag was eventually found in the director’s garage, and two years later he was found guilty of multiple counts of fraud, theft and money laundering.

The government then took back custody of Neil Armstrong’s bag, however a monumental error was then made when it was misidentified as a different bag, one that hadn’t carried moon rocks. This error came about due to a mix up involving inventory lists and serial numbers. As a result, this seemingly valuable but insignificant bag was listed for auction by the government, where Ms Carlson picked it up not knowing its history.

At this point the story could have ended, however Carlson sent it to the Johnson Space Centre to find out more about it. Once the experts at Johnson saw it they realised they were holding a priceless Apollo 11/Neil Armstrong artefact, complete with moon dust, and that it should never have left the possession of NASA. With this revelation NASA held onto the bag, placed it under lock and key, and never returned it to Ms Carlson.

Carlson sued NASA to get her bag back and while a judge agreed that NASA had been a victim in the whole situation, a federal court found in favour of Carlson and ordered the bag returned to her. It is now the only item of this kind in private hands.

Understandably, NASA was not happy. “This artefact, we believe, belongs to the American people and should be on display for the public,” the agency said in a statement, “which is where it was before all of these unfortunate events occurred.”

While Carlson received a hefty payday when the bag sold, a portion of the proceeds were donated to charity and to set up a scholarship at her alma mater.

Sotheby’s have not revealed any details about the new buyer. It was hoped the new buyer would loan it back to NASA and allow it to go on display, because while Carlson technically did nothing wrong and was entitled to sell the bag (let’s be honest, we all would), it ultimately belongs back on display for everyone’s benefit.

This article was originally published in May 2017, and has been updated