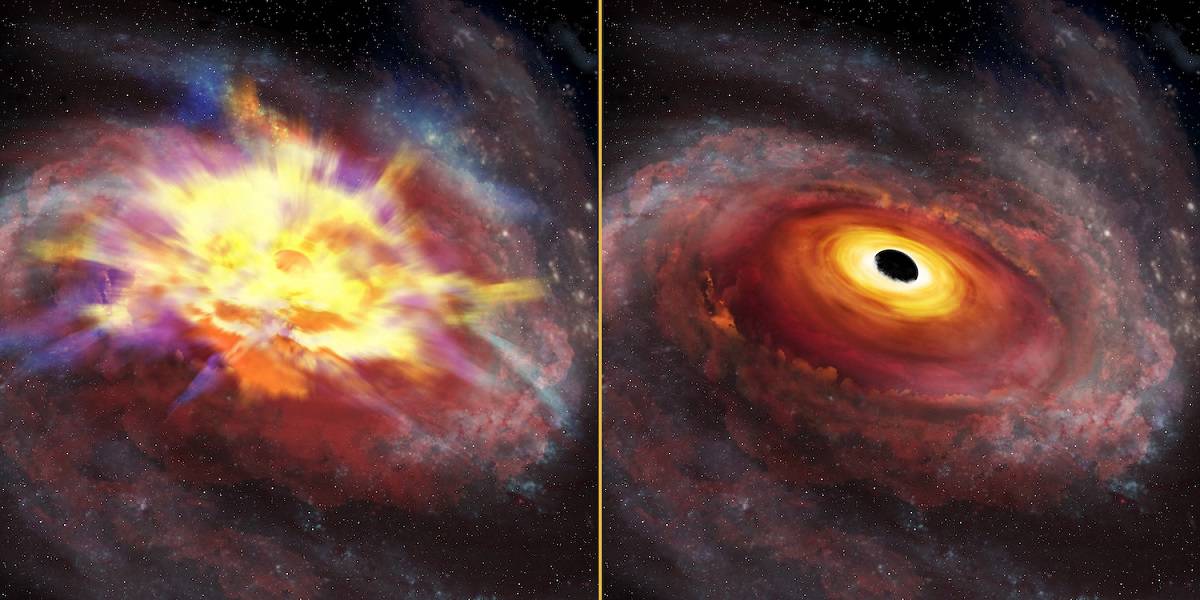 Left: an artist’s conception of the central portion of the galaxy that hosts the quasar, viewed at optical wavelengths. Right: the same view at infrared wavelengths, as seen by the Gemini GNIRS detector. Credit: International Gemini Observatory/NOIRLab/NSF/AURA/P Marenfeld
More on:
black hole

Astronomers say they have detected the most energetic wind ever measured from any quasar.

It is travelling at nearly 13% of the speed of light, carries enough energy to dramatically impact star formation across an entire galaxy, and yet, they add, lay hidden in plain sight for 15 years.

It stems from a quasar known as SDSS J135246.37+423923.5, which lies about 60 billion light-years from Earth, and was unveiled thanks to computer modelling of new data from the Gemini Observatory in Hawaii.

Writing in The Astrophysical Journal, the researchers say it now holds the record for the most energetic quasar wind measured to date, with a wind more energetic than those recently reported in a study of 13 quasars.

And they suggest the supermassive black hole powering it is 8.6 billion times as massive as the Sun – about 2000 times the mass of the black hole in the centre of the Milky Way.

“While high-velocity winds have previously been observed in quasars, these have been carrying only a relatively small amount of mass,” says Sarah Gallagher from Canada’s Western University, who led the Gemini observations.

“The outflow from this quasar, in comparison, sweeps along a tremendous amount of mass at incredible speeds. This wind is crazy powerful, and we don’t know how the quasar can launch something so substantial.”

Quasars – also known as quasi-stellar objects – comprise a supermassive black hole surrounded by a glowing disc of gas. They can outshine the stars in their host galaxy and drive winds powerful enough to influence entire galaxies.

First author Joseph Choi from the University of Oklahoma, US, says SDSS J135246.37+423923.5 is particularly windy – its outflow is so thick that “it’s difficult to detect the signature of the quasar itself at visible wavelengths”.

Nevertheless, the team was able to get a clear view of the quasar using the Gemini Near-Infrared Spectrograph (GNIRS) on the Gemini North telescope o observe at infrared wavelengths. And there may be others.

“Since automated software generally identifies quasars by strong emission lines or blue colour – two properties our object lacks – there could be more of these quasars with tremendously powerful outflows hidden away in our surveys,” Choi says.

Originally published by Cosmos as Thar she blows – up in space