Home ■ Space ■ The spider of Pluto gives up its secrets 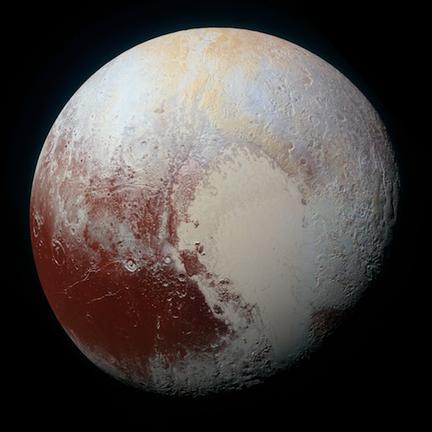 NASA scientists released high-resolution images of a feature that sprawls across Pluto's icy surface resembling a giant spider. They say the pattern of fractures is probably caused by focused stress beneath the surface.

“The pattern these fractures form is like nothing else we’ve seen in the outer Solar System, and shows once again that anywhere we look on Pluto, we see something different,” says NASA geologist Oliver White.

The images are the latest in the treasure trove of data gathered by the New Horizons spacecraft that last July sped across the face of Pluto at an altitude of just 12,000 kilometres – although the enhanced colour image above was captured about 45 minutes before the closest approach from a range of about 33,900 kilometres.

The "spider" consists of at least six fractures, indicated by white arrows, converging to a point near the centre.

The longest fractures are aligned roughly north-south, and the longest of all, the informally named Sleipnir Fossa, is more than 580 kilometres.

To the north and west, the fractures extend across the mottled, rolling plains of the high northern latitudes, and to the south, they intercept and cut through the bladed terrain informally named Tartarus Dorsa. (The image below shows where on the face of Pluto the feature is located.)

The spider’s “legs” noticeably expose red deposits below Pluto’s surface, but there is no clear indication yet of their composition.

The New Horizons scientists think the feature has been caused by different forces than the many  fractures seen elsewhere on Pluto, which tend to run parallel to one another. They believe those are caused by flexing of the dwarf planet's water-ice crust.

But the distinctive radiating pattern of the fractures forming the “spider” may be caused by more localised stress in the crust beneath. The scientists are not sure what this is but say it may be due to material welling up from under the surface.