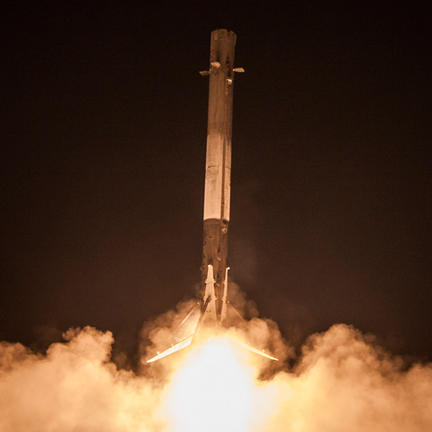 On December 21 2015, SpaceX made history by successfully landing its Falcon 9 rocket, 10 minutes after lift-off from the Cape Canaveral Air Force Station in Florida.

In early January, the US-based company released new pictures of the returned rocket looking somewhat scorched after its trip into space. But CEO Elon Musk said the Falcon 9 was undamaged by its landing and ready to fire again.

The shiny new Falcon 9 rocket, still in the hangar, before its late December launch.

The Falcon 9 rocket, complete with payload, on the launch pad in Florida. The primary purpose of the launch was to carry 11 Orbcomm communications satellites into low Earth orbit. Landing the main rocket safely back on Earth was the secondary mission.

SpaceX converted an adjacent Cape Canaveral launch pad, previously used by NASA for Atlas rocket launches, into a landing zone. The launch was SpaceX’s first attempt to land its rocket on solid ground after sending it into space. The company had previously tried, and failed, to land the rocket on a floating sea platform.

At 8.29pm local time, the Falcon 9 lifted off, carrying its satellites into space.

After successfully releasing its payload into orbit, the Falcon 9 returned to Earth.

In this single 10 minute time-lapse photograph, SpaceX captured the rocket’s lift-off and landing.

The returned rocket on the landing zone.

On December 24, the slightly scorched rocket was returned to the hangar, where SpaceX engineers checked it over and found no damage.

SpaceX has become quite attached to its history-making rocket, and says this particular Falcon 9 will not be launched again. In order to prove that the rocket still works, the company does plan to fire it up again – although it will be firmly tethered to the ground first.