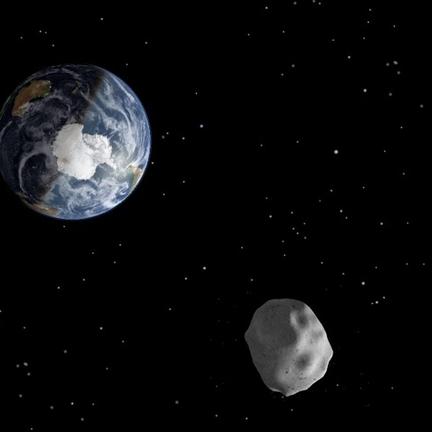 Asteroid-seeking missiles could be ready in as little as 20 years, Russian scientists say.

The Makeyev Rocket Design Bureau, which specialises in long-range ballistic missiles, has developed a project to upgrade its fleet – and aims to be ready for target practice on Apophis, as asteroid due to pass Earth in 2036.

Astronomers have found nearly 13,000 "near-Earth asteroids" – relics of the Solar System's birth that hurtle around the Sun close to us. But their orbit isn't as ordered as the planets'. Their path often crisscrosses ours.

And around 1,000 near-Earth asteroids are more than a kilometre in diameter. Should one of those smash into Earth, we could see another mass extinction on the magnitude of the end of the dinosaurs.

Detecting the asteroids' path and forecasting which will fly by harmlessly – and which will come uncomfortably close – is the realm of NASA's Near Earth Object Program.

But should an asteroid be identified as a potential killer, how do we stop it – especially if we only have a couple of hours' notice?

With missiles, of course.

The Russian upgrade project aims to boost range to hundreds of thousands of kilometres; maybe even millions.

The main benefit of missiles over rockets is fuelling time. A rocket needs huge amounts of fuel and filling up the tank takes around 10 days.

"Therefore, they are unfit for destroying meteorites similar to the [20-metre] Chelyabinsk meteorite in diameter, which are detected several hours before coming close to the Earth," says Makeyev Rocket Design Bureau researcher Sabit Saitgarayev.

Ballistic missiles, on the other hand, are ready and waiting to be fired, and can strike targets within about half an hour.

While they can fly more than 5,500 kilometres, they don't yet have the range to penetrate the far reaches of space. The Russian upgrade project aims to boost that range to hundreds of thousands of kilometres; maybe even millions.

They hope it will be ready for the 2036 passing of 325-metre asteroid Apophis. It briefly made headlines in December 2004 when astronomers calculated that if it passed through an 800-metre-wide region of space during its 2029 flyby, it would swing around for a direct collision with Earth seven years later.