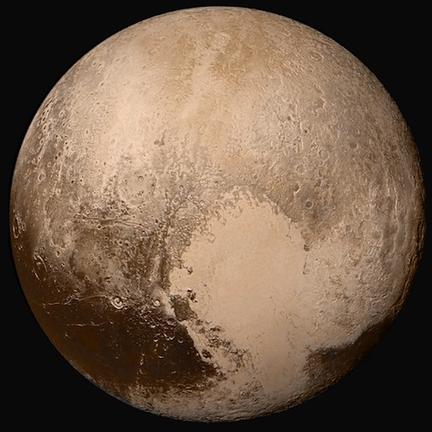 Pluto interacts with the solar wind in an entirely different way than any other body in the Solar System, say scientists who analysed data from the fly-by of NASA spacecraft new Horizons.

“The results are astonishing,” said Princeton University’s David McComas, lead author of a study published in the Journal of Geophysical Research – Space Physics.

Scientists had expected the dwarf planet to behave a little like a comet, but instead, they found its interaction with the solar wind had more in common with larger planets such as Venus and Mars.

The solar wind is the plasma that streams from the Sun at 160 million kilometres per hour, peppering all in its path with protons and electrons.

When these meet a comet, the solar wind gently slows rather than the sudden diversion that happens with Venus and Mars. Scientists say that Pluto is a hybrid of these two.

Due to its small size, scientists did not think Pluto’s gravity could hold heavy ions in its extended atmosphere, but they were wrong.

The researchers were able to separate the heavy ions of methane, the main gas escaping from Pluto’s atmosphere, from the light ions of hydrogen that come from the sun using the Solar Wind Around Pluto (SWAP) instrument from the New Horizons.

It also appears that, as with Earth, Pluto has a long ion tail that extends “downwind” at least a distance of about 100 Pluto radii, or 118,700 kilometres. This is loaded with heavy ions from the atmosphere.

These findings offer clues to the magnetised plasmas that one might find around other stars, said McComas.

“The range of interaction with the solar wind is quite diverse, and this gives some comparison to help us better understand the connections in our solar system and beyond.”