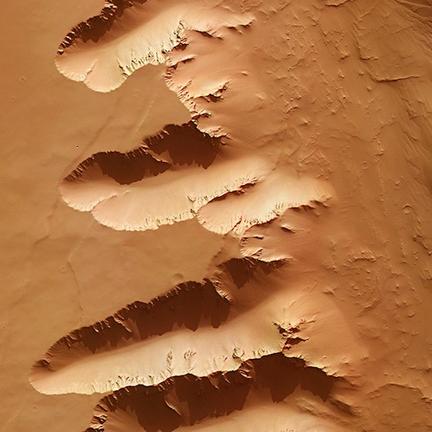 The European Space Agency (ESA) has released a series of stunning images of the Noctis Labyrinthus region of Mars. They were taken last year by the High Resolution Stereo Camera on Mars Express, which is orbiting the Red Planet.

Noctis Labyrinthus, "Labyrinth of the Night", lies to the west of the Valles Marineris. It is now known for its maze-like deep, steep-walled valleys and canyons that formed by faulting.

The region is noted for it many classic features of grabens – elongated trench-like structures between two parallel faults (graben means ditch in German).

It is thought that this faulting was triggered by volcanic activity in the Tharsis region to the north, which formed a bulge, resulting in tectonic stress. This caused the crust to thin out in the surrounding terrain, leaving fractures several kilometres deep in some places and forming the grabens.

The network of these past upheavals is around 1,200 kilometres across. The imagery here covers about 120 kilometres.

The image above focuses on a flat-topped graben from directly above. The sides are etched with landslides, with wind-blown dunes in the floor of the surrounding trench. In the lower right part of the image dust has blown into huge dune fields.

The ESA issued the image in a colour-coded topographic view that shows relative heights and depths of terrain. Red and white represents the highest terrain, and blues and purples show lower terrain (see key in top right of the image).

The image above is based on a digital terrain model, from which the topography of the landscape was derived.

The image above shows part of the Noctis Labyrinthus region of Mars that was taken by the High Resolution Stereo Camera on ESA’s Mars Express. The region outlined by the inner white box is the area where the previous pictures were taken.

It is, of course, not the first time time the region has been studied. The image below was taken by the High Resolution Imaging Science Experiment (HiRISE) camera on NASA's Mars Reconnaissance Orbiter around the same time as the ESA images, in July last year.

The NASA image shows layers in the lower portion of two neighbouring buttes within the Noctis Labyrinthus formation.